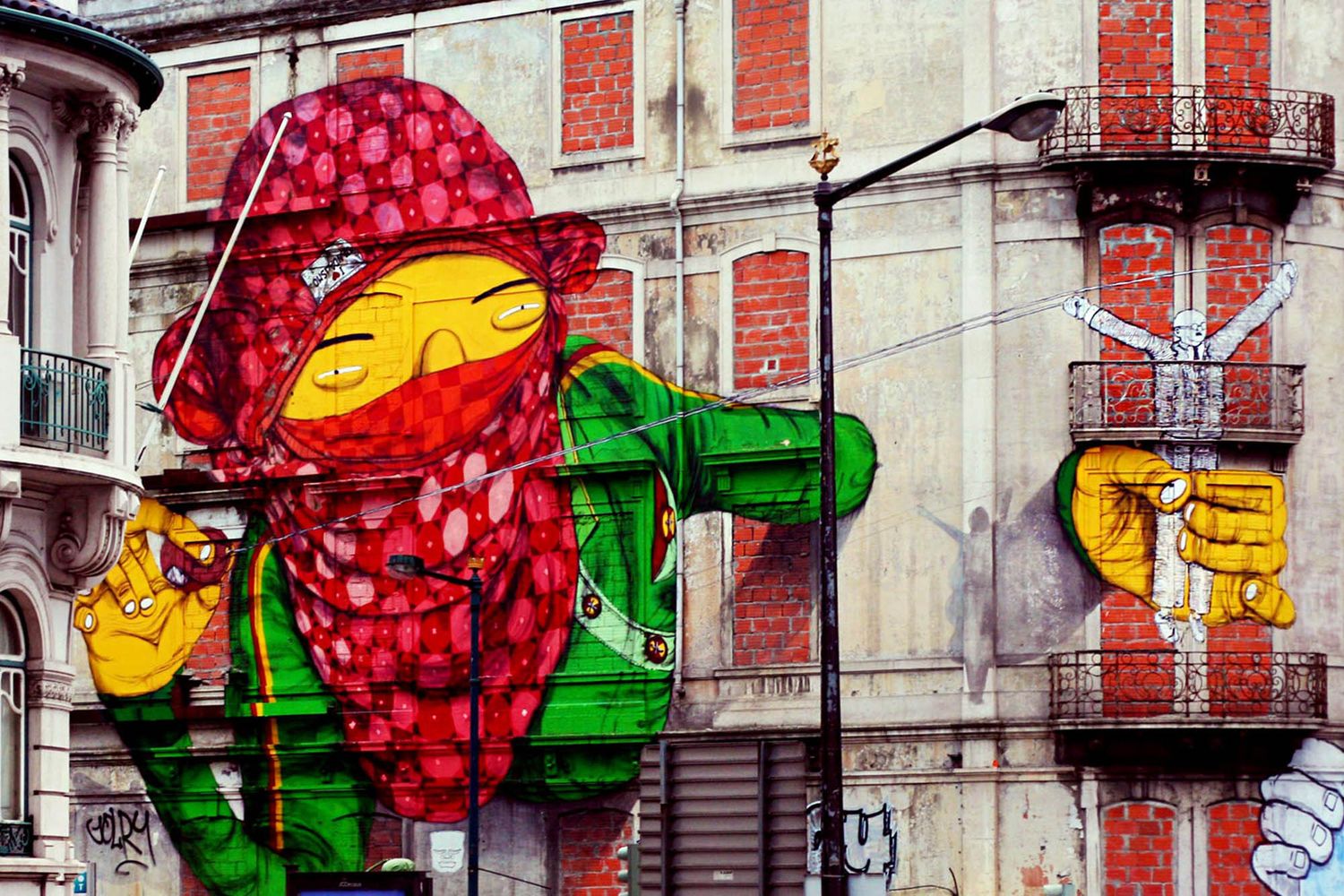 Although New York, Paris, London, Berlin, Barcelona or Amsterdam are pioneer cities for the development of the movement in Europe, many other cities have had a decisive role and are now positioned as open-air museums for Street Art lovers. Rome, Ghent, Lisbon, Toulouse and Athens invite you to wonderful urban walks around Graffiti and Street Art, discover our list of the best spots not to be missed in these 5 must-see cities in Europe for any art lovers.

Street Art in Rome is not insignificant! For a few years now, the Italian capital has been experiencing its moment of glory, thanks to the rehabilitation of disadvantaged districts initiated by "The Big City Life Project" which aims at transforming its neighborhoods into open-air museums! Like in Tor Marancia, which hosts 22 murals on 11 buildings. The Ostiense district which houses 30 murals signed by local and international artists, such as MTO, Axel and Rero. Covering more than 1000 m2, the Italian artist Iena Cruz created the largest ecological mural in Europe, partly made with paint that absorbs nitrogen oxide. A stone's throw away from there, Blu and JBrock have also been there, and in Testaccio, the Belgian Roa is also present. The popular districts of Torpignattara and Quadraro have also become iconics, thanks to the M.U.Ro. project (Museo di Urban Art di Roma) which hosts 25 works by Italian (Davis Diavù, Alicè...) and international artists (the Polish Etam Cru, the French Jef Aerosol, the Americans Garry Baseman and Beau Stanton...). Not to be missed either, the tribute to Pasolini by the Italian Nicola Verlato, 10 meters high and almost 6 meters long. Finally, the districts of Pigneto and Trastevere also offer many street works and have become hot spots for street art lovers over the years.

Ghent, its graffiti alley and its local legends

In Belgium, Ghent has also taken a liking to Urban Art. The Werregarenstraatje is a free area for Graffiti, the practice being tolerated there, it has been renamed "The Graffiti alley" and it hosts multiple paintings that change every week. The Tweebruggenstraat does not go unnoticed either. But in Ghent, Urban Art can be found in all over the city! To help you find your way around, the organization "Street Art Belgium" has published a guide that lists the works and the artists of the city: Joachim Lambrechts, Super A, Bastardilla, Chase, Mazu Prozak... are among them. There is also the "Sorry Not Sorry" map, which gives an overview of the legal murals and street works that can be admired in Ghent and that the tourist office is happy to make available free of charge. This  is to encourage tourists to walk through an artistic pathway and discover the city as an open-air exhibition for this form of contemporary art. The city is also marked by numerous paintings from Roa, and the world-famous Bué the Warrior and A Squid Called Sebastian.

In Lisbon too, graffiti, tags, stencils, collages... can be seen on the walls and you can also contemplate beautiful murals on many facades. Regulated and encouraged by the government, Street Art is everywhere and the city has become a huge playground for artists, from the Alcantara district to the Bairro Alto. Portuguese artist and environmental activist Bordalo II is well known for his impressive works made from different waste. Vhils, also Portuguese and famous for his pointillist sculpture, also creates many portraits here. Other local artists, Antonio Alves and Rigo offer a Maoist-inspired mural. In Chiado, the work of Oliveiros Rodrigues da Silva Junior must also be discovered. Near the Miradouro da Senhora do Monte, Aka Corleone's colorful painting is as unavoidable as Shepard Fairey's two murals in the Graça district. For its part, the "Amoreiras Wall of Fame", considered as the largest graffiti wall in the Iberian Peninsula, has been hosting numerous artists since 1995. Nomen, Slap and Kurtz, with their work representing Angela Merkel holding Portuguese politicians like puppets, made a big noise! Along the way, we can discover works by Derlon, Aryz, Blu, Odeith, Utopie 63... Since 2017, the "MURO Urban Art Festival" allows great encounters with magnificent murals, by Kobra, Gleo and OS Gemeos for example. Lisbon is therefore an unmissable destination for any street art lover.

Toulouse, the most active and authentic French city after Paris

This is also the case in Toulouse, France. Many artists have put a tag, a graffiti or a mural on the walls of the pink city, which has a long history with Graffiti since the late 80s. Influenced by the New York culture, the first graffiti artists left a lot of inscriptions on the walls and in the wastelands of the Arnaud-Bernard district. The movement exploded at the end of 1990 with artists like Tilt, Soone, Moskito and Ceet Fouad from the historic collective "Truskool". The graffiti artists Miss Van, Fafi, Plume and Mademoiselle Kat (from the group Hanky Panky Girls) have also been key contributors for the movement. Reso, Maye and Mondé, to name a few, are also widely recognized. Thanks to its pioneers, Toulouse which also welcomes foreign graffiti artists, acquires an international reputation in the 2000s. Today, Urban Art is an integral part of Toulouse culture, with famous places such as the Gramat street, the walls of the Canal alongside the Garonne or the Arsenal university (one of the oldest spots)... While the city commissions local and international artists to paint huge murals, festivals such as "Rose Béton" also contribute to the movement with the help of the city council. Almost everywhere, "tolerated" places also give way to real works of art such as "La Symphonie des Songes" by Miss Van, "L'épopée de Gilgamesch" by Poes et Jober or the 100Taur mural (one of the longest in the city.) Considered to be the most active city in terms of Street Art after Paris, Toulouse definitely has nothing to envy of other European cities!

Athens, considered as the "contemporary Mecca of Street Art”

Since the crisis of 2008, the Greek capital has become a hotspot for European Street Art and was even crowned "Contemporary Mecca for Street Art in Europe" by the New York Times in 2014. Tags, graffiti, stencils, political slogans, stickers, collages, murals..., Urban Art is everywhere, especially in the districts of Exarchia, Psyrri, Anafiotika, Gazi and Metaxourgio. The municipality promotes and regulates the profusion of street works while associations (UrbanAct) and festivals contribute to the development of the artistic scene. Locals and internationals, artists are numerous like Tare One who is a pioneer since 1993 and the street works are famous like the one from INO (Greek street artist well known in the city and beyond) which describes the political corruption and the riots through a 90 meters long painting or "The Kiss" of Illias Papailiakis (famous Greek artist) which spreads out on 22 meters high. Other local figures, Stamatis (STMTS) with his mural "I love life" which was published in the pages of the Guardian and the New York Times, Alex Martinez who represented the dog Loukanikos, an icon of the protests against austerity and finally WD (Wild Drawing) who illustrates a homeless person lying on a 10-meter wall or a big owl. But that's not all! From Piraeus to the School of Fine Arts, through the campus, other huge and colorful murals call out the pedestrians. One can see works by Simoni Fontana, Achilles, Blu, Itsmi, Bleeps, Sonke, Vasmou... The list is too long to mention them all!