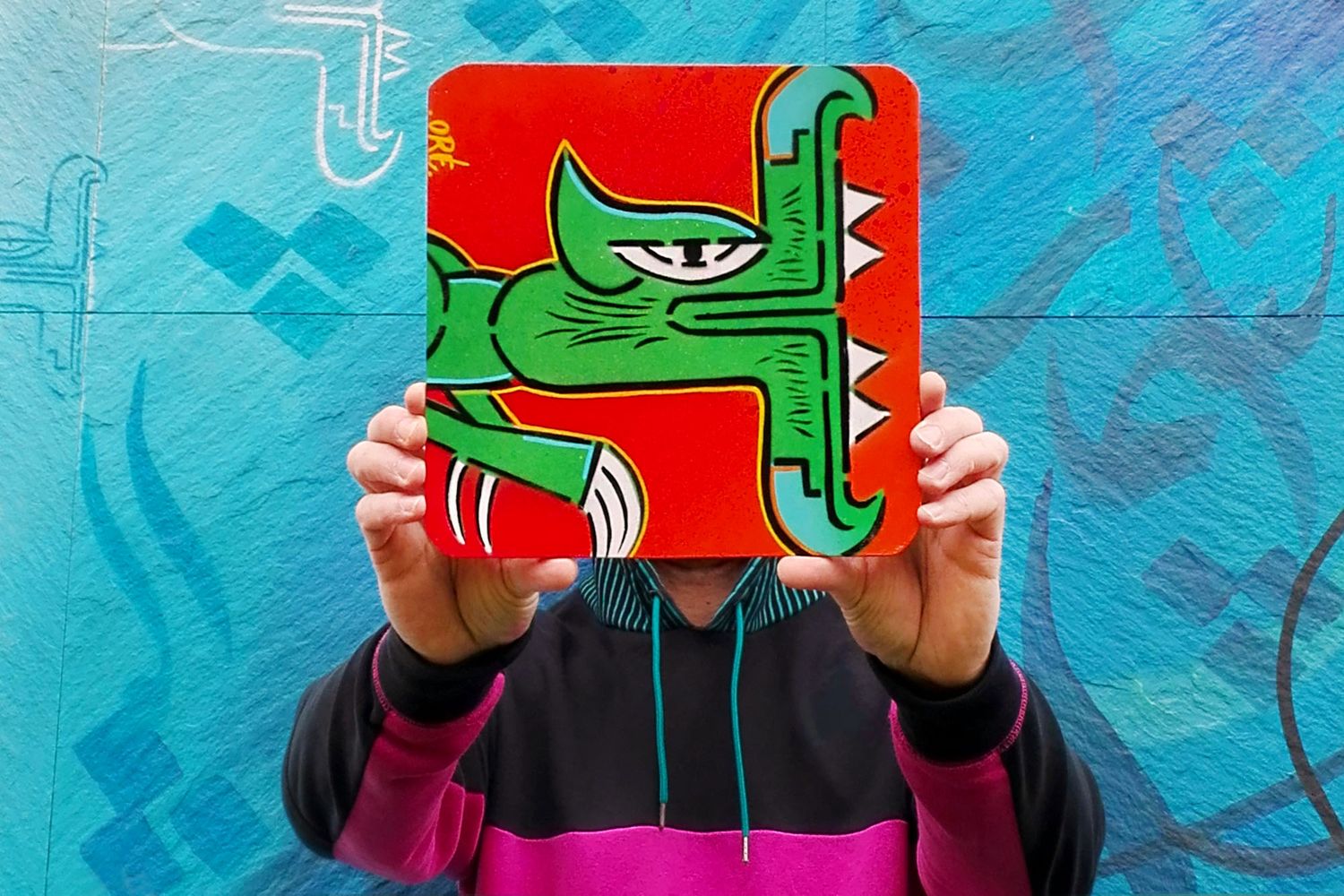 Oré: "I like to play with urban space and use it as my studio"

Urban artist resolutely anchored in the plurality and diversity of the international contemporary scene, Oré plays with mediums and public space. A visual artist attached to his native Normandy, he has made his travels the guideline of his artistic career. His plywood plaques decorated with the Quetzalcóatl, a feathered snake from the pre-Columbian divinity, placed in the centers of the world's largest cities have become his urban signature. However, the artist's career is not limited to these installations. Painting and the occupation of the street remain his leitmotivs.

What was your first encounter with graffiti?

I was born in Evreux in 1975. I lived in Le Havre and finally landed in Caen which is since my base camp. My first encounter with Graffiti took place in 1989 when I was a teenager. I was lucky enough to see the Hip-Hop culture grown in France, Evreux being close enough to Paris to see the wave coming in the cities: Rap, Breakdance, Graffiti... This culture, which has its own codes and from which adults are excluded, immediately appealed to me and I quickly developed an attraction for this spirit of freedom, this movement which invites to write on the walls, to invade the cities. With a marker or a spray can, I started to repeat my pseudonym and Oré quickly imposed itself. At that time, I had no idea that this passion could become my job.

What was the trigger that put urban arts at the center of your artistic life?

I learned everything by myself. Graffiti led me to pictorial creation. At the beginning, I had a rather radical vision of the money associated with Graffiti and I did not want to make a job out of it. I therefore pursued university studies in history and geography, motivated by my desire to travel and discover new cultures. This quickly created an interaction between my travels and my paintings. And it was during my first trip to Mexico in 1998 that I discovered the image of the Quetzalcóatl, the iconic feathered snake of the pre-Columbian culture. I painted it in Le Havre as soon as I returned. A small seed was sown in me at that time, and it blossomed in 2004 after another one-year stay in Mexico. I had not passed the teacher's exam, I had become a father and I was questioning myself a lot about my relationship with Graffiti. I saw a mass of graffiti artists arriving and I was afraid of getting lost. I wanted to differentiate myself. This period also coincided with the cleaning campaigns in the big cities of France. You were tagging on Friday night, Monday morning everything was erased... So I wanted to remain present in the city centers, I tried to develop a new aesthetic form, to develop my technique. That's when I said to myself that maybe I could make a living from my art.

How did the famous Quetzalcóatl become your signature?

I was inspired by the master in the field: Invader. Thanks to him, France has become a very good school for collagists. I started to work on serial images, small formats that I placed high up in the streets, in the interstices of the city, where not everybody is looking and where I can escape the cleaning. I cut nautical plywood, which I painted before applying a coat of varnish. This material has a good resistance over time. I did some tests in Caen in 2005 and then I made a first series of about fifteen pieces in Marseille in 2006. I therefore gradually left the practice of Graffiti for that of Street Art, with its stencils and collages. The Quetzalcóatl took the place of the lettering and I started to put my emblem instead of signing with my name. And it is from 2007, that I began to stick on Paris and then in the big cities of France, Europe and the rest of the world. Today, and even if I never really kept track record of my art, I think there are at least 2'000 Quetzalcóatl spread all over the world.

Identifying yourself only with your collages remains rather reductive. Can you explain your other artistic practices?

To quote Paul Gauguin that I read in Paris Tonkar, the book of reference about the French graffiti scene which was written by Tarek in 1991: "The craft comes by itself, despite oneself, with practice, and all the more easily when you think of something else than the craft". I have indeed exercised my eye above all and through practice came the mastery of the relationship with space, the large format. And even if I did not study fine arts at school, I remain curious and passionate about history, literature, archaeology and cinema, from which I draw my inspiration. My aesthetic phases follow one after the other: giant fish, Mexican calaveras, cave paintings... I remain a lover of the wall, whatever it is, and the place always determines what I am going to do on it. What I like the most is to appropriate the city and make the urban space my studio. I'm one of those people for whom being on the street is fundamental. I can spend up to two months without setting foot in my studio, but rarely more than a week without painting or pasting in the street. I like the impact to be strong with small formats made with artisanal means. Manual work is my driving force and being part of the urban space contributes to my well-being.

You were in the United States earlier this year, what were your projects there?

Invited by Artiste Ouvrier, an artist from Normandy who now lives in Los Angeles, I came to paint a mural with him. I took the opportunity to stick two or three Quetzs next to his gallery but also in downtown Los Angeles. Then I went to Phoenix, where I am used to go several times a year. I also painted during an event and I worked on a collage in honor of a professional basketball player from the Phoenix Mercury team: Brittney Griner. She is one of the greatest American basketball players and she is considered by some as the best player in the world. She was playing for a team in Russia during the American off-season, because she was paid about five times more than in the United States. But a few days before the beginning of the war in Ukraine, she was arrested in Moscow by the Russian authorities at the airport because she would have had vape cartridges containing hashish oil... Since then, the Russians use her as a diplomatic hostage so I wanted to denounce this situation. Otherwise since my return to France, I have had other projects in Normandy, including a huge mural on the roof of a thermal institute in Bagnoles de l'Orne where I painted a 500 m2 Quetzalcóatl which unfolds above a background made of Japanese prints. The city also commissioned me to paint a series of Quetzalcóatls for an official Street Art tour in the heart of the city that I strongly invite you to discover if you go there!

Discover the profile of Oré and his available artworks.