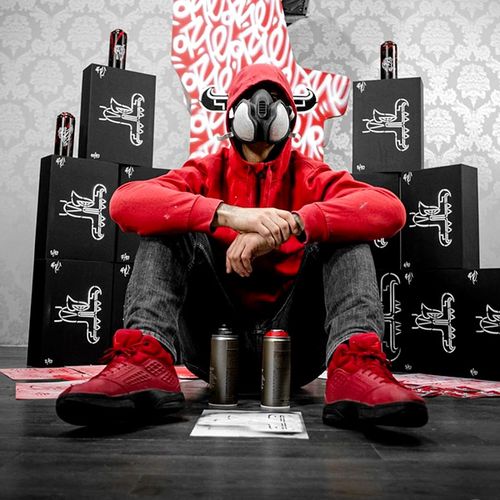 Originally from Caen in Normandy, ORÉ started to paint graffiti in 1989. For a decade, he tagged cities across Europe. But during a trip in Mexico in the early 2000s, he discovered the mythical Quetzalcoatl, the Aztec god which is portrayed as a feathered serpent. This mythological icon then became an essential feature of his pictorial universe.

While continuing to paint spontaneously in the public space, he also creates commissioned murals and exhibits his works in France and abroad (Germany, United Kingdom, Greece, Spain, Mexico, Nicaragua, Japan). Not to mention that he is also regularly invited for residencies or performances during events and festivals.

A protean artist, Oré explores, beyond his passion for Mayan mythology and the Quetzalcoatl, all types of themes through a wide variety of techniques (stencil, spray paint, pole roll, collage). You can find his Quetzalcoatl pasted up in the streets of 40 cities all over France (Paris, Lille, Marseille, Montpellier, Toulouse, Bordeaux, Lyon...) and in the major cities of the world, including: Athens, Barcelona, Berlin, Brussels, Dublin, Hamburg, London, Los Angeles, Mexico, Paris, San Francisco, Rome, Tokyo, Vancouver.

Since 2011 and in parallel to his urban artist career, Oré has also been involved in Land Art and Earthworks. He created a first monumental lettering of stones in Greece at the bottom of the Mount Olympus and still continues his creative path in different natural spaces through his travels and over the years: Death Valley National Park in California, Bardenas Desert in Spain, Hokkaido Island in Japan, Finnish Lapland...