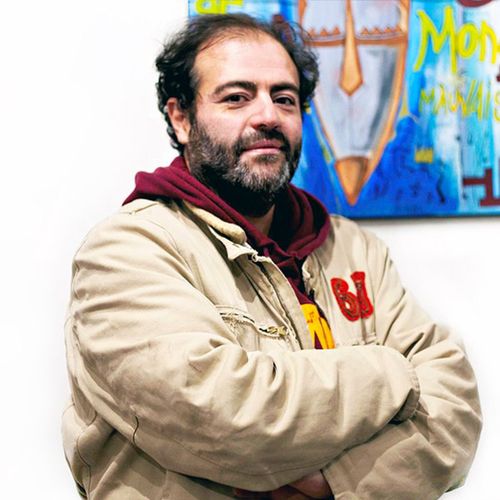 Born in 1971 in Paris, Tarek Ben Yakhlef aka TAREK is a multidisciplinary French artist. While being an unconditional fan of Graffiti, he also stands out in photography but also in writing, illustration and comics that he feeds with his modern and endearing characters.

Graduated from the Sorbonne university in Paris in medieval history and art history, but fond of Urban Art since his teenage years, he quickly immersed himself in the world of Graffiti and while he was only 20 years old, he published "Paris Tonkar", the very first book dedicated to Graffiti in Europe, released in July 1991. Considered as a real bible for many artists at that time, this book became a reference as it gave a voice to taggers and graffiti artists for the very first time, in explaining their motivations, their artistic approaches as well as the public's perception of this brand-new cultural phenomenon.

As a privileged witness of the development of French Urban Art, Tarek gradually abandoned the use of spray cans for the camera in order to freeze the ephemeral street works of this movement, while developing in parallel a studio work on different mediums. Drawing his inspiration from the world around him, the streets and his travels, the artist's universe is inspired by tribal masks, advertising posters and spray cans.

Listed on the art market since 2014, his paintings have been exhibited all over the world and some of his artworks have entered the collections of art lovers around the world, but also those of museums, cities and private companies as well. Today, he continues to leave traces of his passage on the walls of the cities he travels and he regularly takes part in festivals or major events dedicated to urban cultures.