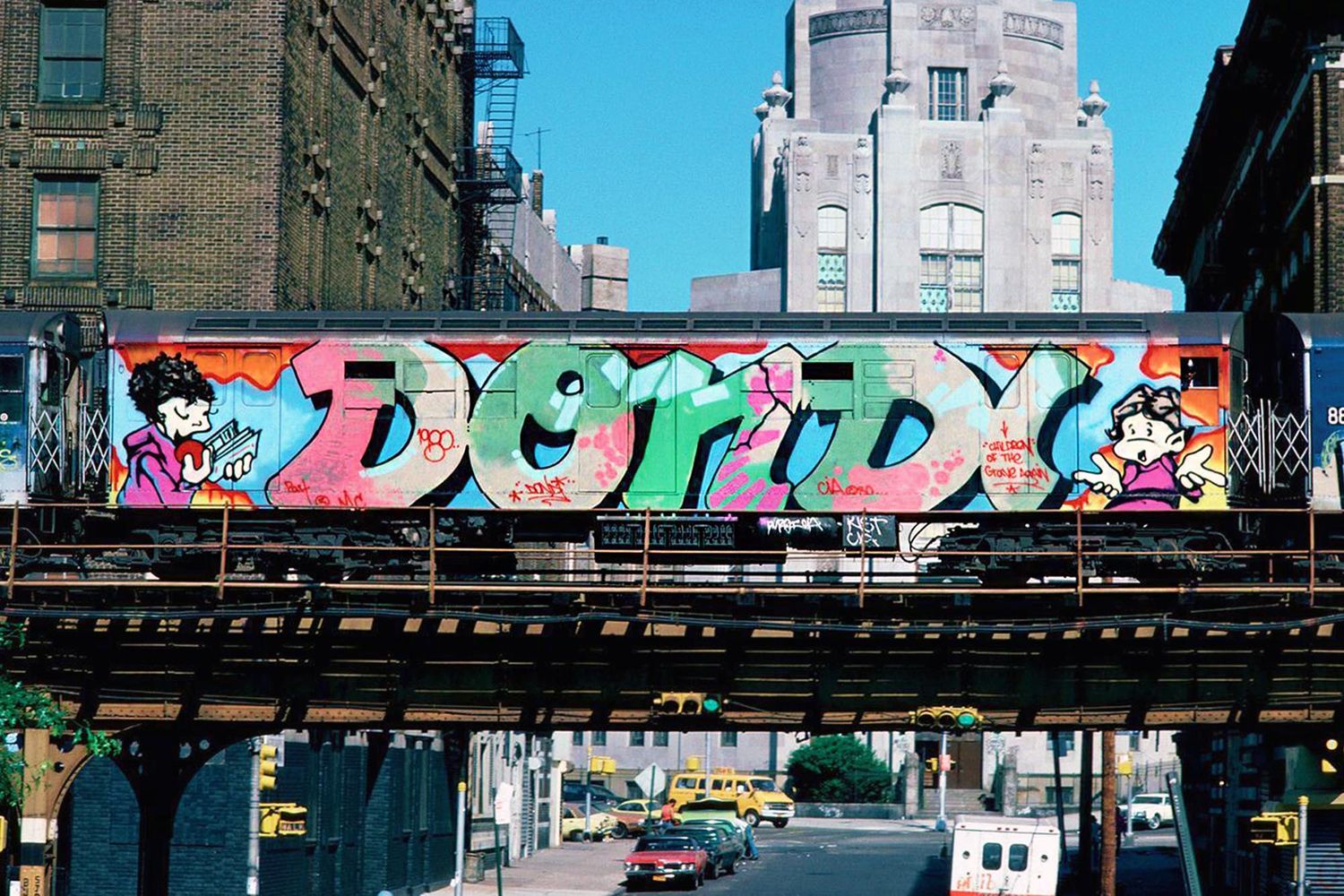 Urban Art, a long but undeniable recognition on the art market

For Jacques Villeglé, Street Art is not "a job of monks", and being an urban artist who interact in the city does not mean "taking a vow of poverty". The common belief according to which an urban artist could not leave his street practice for a studio work under the penalty of being badly perceived has lived, as an evidence, one can notice all the events highlighting this movement. Here is a look back at the progressive and long-standing recognition of what we can now call Urban Art.

A fast structuring at the beginning

The studio work of Graffiti artists is concomitant with its deployment in New York in the early 1970s. The exhibition "Floor to Ceiling" organized in 1972 at the City College of New York by Hugo Martinez was the first institutionalized Graffiti event. Although the UGA (United Graffiti Artists) project set up by Martinez ended in failure at the time, it nonetheless made it possible for its participants to become aware of their ability to work in a studio and transpose their art on a canvas. Above all, it then allows a major exhibition to be held at the Razor Gallery in 1973, in the heart of the Soho district where the first photographs by Henry Chalfant and Martha Cooper will be exhibited. This incursion into the trendy New York scene, symbolized by the friendly relationship forged between Jean-Michel Basquiat and Andy Warhol, paves the way for galleries such as the Fun Gallery, founded in 1981 by Patti Astor. The gallery exhibited artists who are unavoidable today such as Keith Haring, Kenny Scharf, Futura 2000, Dondi White, Sharp and Lady Pink. Proof of a real craze for Graffiti in the early 1980s, the Fashion Moda Gallery was even invited to Documenta 7 in Kassel in 1982 and presented the artists Jenny Holzer, Keith Haring and Lee Quiñones.

A slow but permanent anchoring

In Europe, the movement is developing thanks to a handful of avant-garde galleries. This is especially the case with the Thomas Gallery in Munich, which presented the exhibition "Classical American Graffiti Writers and High Graffiti Artists" in 1984 with the work of artists such as Dondi White, Crash and Rammellzee, who were references on the New York scene. The same year, in Rome, Italy, the exhibition "Arte di Frontiera" was organized by Francesca Alinovi. But the most important impact took place in The Netherlands, through the personality of Yaki Kornblit, who worked to raise awareness of the official and institutional artistic framework for Graffiti artists. In France, the arrival of Graffiti on the art market also took place through galleries. The first Graffiti exhibition took place in 1989 thanks to the Galerie du Jour from Agnès b., but also the Magda Danysz gallery which was created in 1991, not to mention the undeniable commitment of the collector and gallery owner Willem Speerstra who was the first to exhibit the biggest names of the New York Graffiti scene in France. However, the enthusiasm was still marginal until the turn of the century, when the movement experienced an unprecedented boom and when the Graffiti and Street Art market will start to develop through auction sales.

A disruptive and popular movement

Since the first auction sales held in 2006, Urban Art has been growing steadily. Supported by leading figures such as Banksy, who remains the most famous unknown artist on the art scene, or Obey, whose career exploded thanks to his poster "Hope" for the first inauguration of Barack Obama, the British Stik or the French Invader. Some auction houses such as Artcurial or Tajan quickly seized on the phenomenon and have been offering dedicated sales for more than a decade now, while at international level, the behemoths Christie's and Sotheby's have not hesitated to include masterpieces from the biggest names into their general contemporary art sales. This development has been accompanied by the breakthrough of a few artists in major international galleries on top of specialized galleries. This is particularly true for Brian Donnelly, better known as Kaws, who has long developed himself through the Perrotin Gallery and who is certainly, apart from Banksy, the most popular artist of the Urban Art movement today. This state of affairs also highlights a recognition resulting from a broadening of the audience made possible by social networks and the online art market. These networks constitute a global and popular showcase for artists, while some of them develop their image like a brand, proof of which is, beyond the often unattainable artworks, the development of co-branded products or limited edition objects that are snapped up by the public.

For more than 50 years, Urban Art has operated a huge transformation, from its underground roots to its anchorage in the art world and pop culture. Multi-dimensional by nature, this movement has had an influence in the fields of music, fashion and dance. As a sign of this transition from a minor to a major art form, it is now displayed in our physical and digital environment every day. Ever more disruptive and innovative, the movement is also logically accompanied by new distribution models such as online platforms.

Discover our article about the results of Urban Art auctions sales