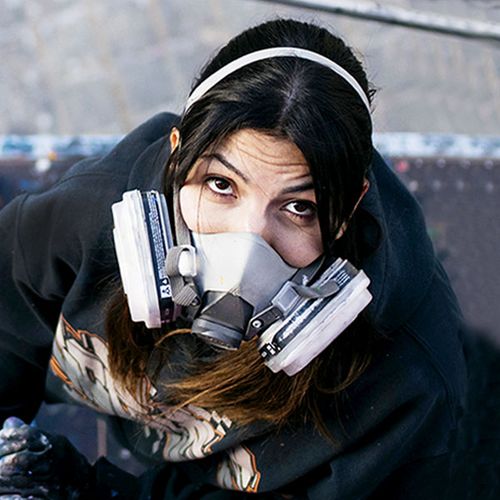 Born in 1990 in Bogotá (Colombia) and living in Barcelona (Spain) since 2016, ZURIK is a graffiti writer and graphic designer. She has built her artistic identity on a dynamic and colorful style based on Graffiti Writing, which has been the starting point for every project she has been part of since the beginning of her career.

The letters that make up her name are the representation of the first letters of her family members. Her style is part of the WildStyle movement, where each letter retains its structural basis, with a set of connections and additions such as 3D dimensions, shadows and effects to achieve a balanced result between creativity and readability. Despite that, Zurik has gradually moved away from the established rules by playing with the organic, geometric and the volumes of the technical drawing to transform her art into a personal, unique and highly recognizable style that has been evolving over the years.

Thanks to this unique style, she has earned a solid international recognition, not only for being one of the few women who practices Graffiti at a professional level, but also because she is constantly evolving, creating different types of murals, without losing her roots and always adapting to the different concerns addressed in Graffiti and Street Art.

Her current work mainly focuses on murals in public space, which constantly enables her to travel but she has recently developed a growing interest in studio work. Nevertheless, Zurik maintains a relationship between what she paints on the street and what she reproduces in the studio. For her, technique remains a priority over the concept and is almost an unbreakable norm, giving the concept a secondary position in the artist’s life.