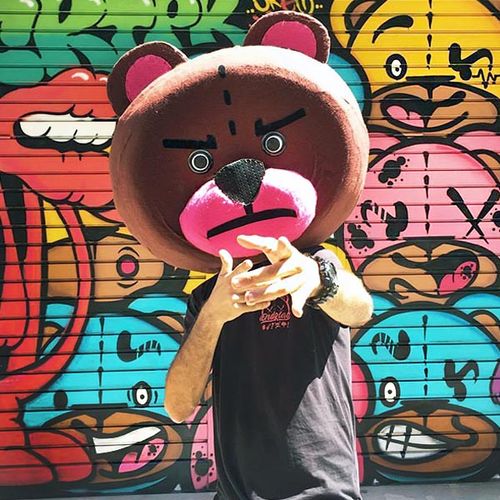 Born in Paris in 1983 from an American mother and a French father, ZACH OREO is a graffiti artist who currently lives in Barcelona. Graffiti has been part of his life since his childhood, nonetheless he considers that his involvement into the Urban Art movement started when he moved to Downtown Paris in the late 90’s: walls and metro tunnels of the French capital became his playgrounds.

Over the years and while keeping his passion, Zach Oreo realized that graffiti was not a job, especially with the anti-tag repression of the 2000s in Paris. In 2005, after a few trips to the United-States, he decided to embark on clothing customization which will lead him to his first steps as an entrepreneur in the mythical Fleas of Clignancourt. He will then create his own brand Endzlab in 2009 and will create his iconic character: The Badass Bear, a malicious and mischievous teddy bear.

Since then, the Badass Bear will take different forms and represent a large part of Zach Oreo’s artistic work, whether in the streets, on canvas or on his textile creations. But his creative universe isn’t limited to that, as the artist likes to make fun of characters or brands known by everyone, a way for him to challenge our minds and make his art readable by all while anchoring it in his time. Constantly crafting with an innovator’s mindset in his lab, Zach Oreo cultivates his independence.