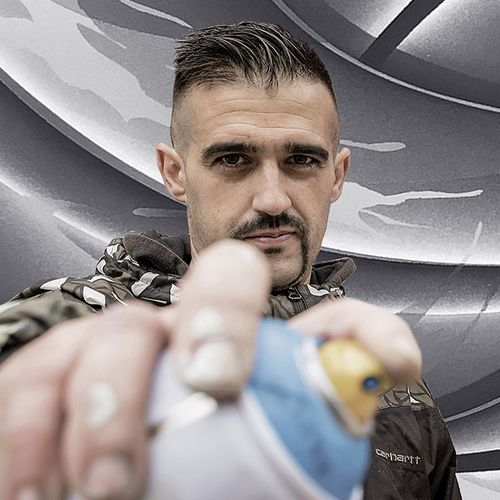 Based in Toledo and born in 1982, WESL is a Spanish artist who began graffiti in 1991. He studied Computer Engineering at ESI (Escuela Superior de Informatica) and also at ESDIP (Escuela Superior de Dibujo Profesional), worked during 10 year in computer engineering and then decided to broke up with it, letting his passion take over the reigns.

His art then became his way of life, exploring and sometimes combining abstraction and realism, bringing two sides into his art. His particularly aesthetic language is characterized by an almost acrobatic use of color in moving wavy forms, volume effects and transparencies that blend together like tonality and rhythm. An almost hypnotic style made in its entirety with spray paint, punctually invading other stylistic aspects.

Both in his abstract and more realistic works, we can appreciate a subtle point of where they come together, found in the way he deals with the blurred parts of his productions. The generous use of the tones in the gradients of the colors gives his works a unique softness. Vanguardism, technique and urban art consolidate the vision of Wesl.