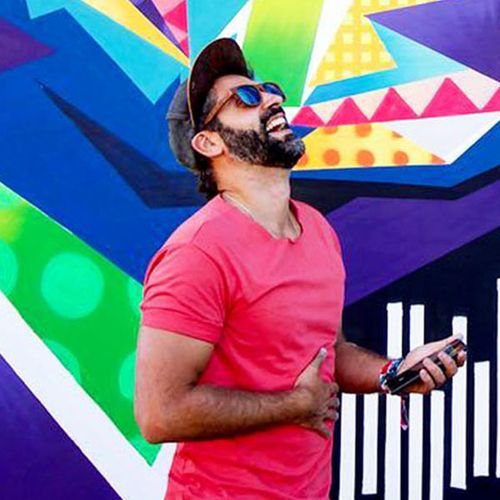 Born in Paris in 1984, TIM MARSH is an urban artist who currently lives and works in Barcelona. He started by becoming passionate about extreme sports at the age of 5, and joined the roller-skating community in 1996, at the age of 12. He then practiced capoeira for 15 years and draws a large part of his inspiration from this period, exploring tribal motives in the graffiti works he produced during this time. In 2006 he moved into the fashion industry as creator of trends for clothing brands, experimented light painting in 2009 and directed the fashion pages for Snatch Magazine at the same time until 2011.

The artist has developed a very personal architectural style, composing his works on the basis of complex and dynamic geometric forms, patterns and lines which embed movement within the depths of his two-dimensional works. His creations provoke a theatrical mood taking a palette of retro-style colors which he applies with spray cans, brushes and markers. His compositions are characterized by the mixture and variety of techniques, developing the work by the use of specific materials and medium such as tape, stencils or even paint jars in his most recent work.

Tim Marsh is constantly developing his techniques, trying out new supports, experimenting his creative process and echoing his past experience in extreme sports by painting on surf and skateboards or other objects. Inspired by urban spaces he went on to expressing his iconography in large-size format on walls and other street supports. Since then, he has exhibited his art in France, Malta, Spain, Hong Kong and have worked with brands like L’Oréal, Smart Cars and Kenzo.