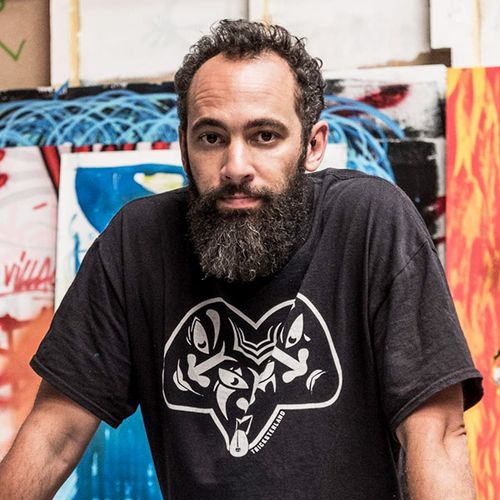 Born in 1978 in Lilas, north-east of Paris, the artist STEW quickly appropriated the street as a playground: rollerblading, skateboarding and then the world of graffiti in the 90s. Trained as a graphic designer, he defines himself as a "computer graphics artist" because he considers the computer as a mandatory tool in his creative process. The stencil allowed him to bridge the gap between his digital work and the street.

Coming from the second generation of Parisian graffiti, Stew has undoubtedly kept the sense of an immediate creation, the confidence in the gesture, which now blossoms in waves of joyful and hypnotic colors. "I've always been passionate about underground culture, punk, techno, hip hop. I spent many nights walking the railroad tracks, hanging out at technivals and painting and then there was this attraction to Asia and stencils, which allowed me to adjust my creative drive...".

Stew particularly draws his inspiration from traditional Japanese imagery, his home country. Kabuki masks, dragons, samurai and Jizo are invited on his collages, his murals, his paintings, and put forward this distant imagination. His works emanate a feeling of majesty, softness and delicacy. A complex and detailed graphic design with an inimitable rendering on abstract backgrounds that highlight the central subject.