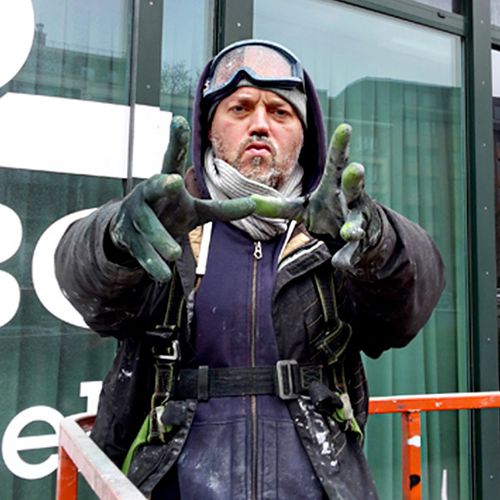 Pablo SOZYONE Gonzalez has been working on lines, shapes and rhythms for over 25 years. Raised with joy and humour by his proud and modest Spanish family from the province of Asturia who fled Franco's Spain, Sozyone very quickly felt free to think and do whatever he wanted, wherever he wanted in his hometown, Brussels. In 1988 at the age of 15, Sozyone met his first artistic partner Smimooz; together they tagged everywhere, all the time, whilst writing the first rhymes and lyrics for the Hip Hop band De Puta Madre. Within a few years he became a reference in the whole of Belgium for his music, his texts and his paintings.

In 2004, Sozyone held his first gallery exhibition 'One Million Murders' (Alice Gallery). Between 2003 and 2013 he concentrated on one concept only : 'La Voyoucratie', portraying the most beautiful specimens from the mafia, French anarchists on bicycles or in front-engined cars or BMWs, German terrorists from the bell-bottomed 70's, the old regulars in Marseille Port, the Spanish commies, the street gangs from New York, the gentlemen thieves of the Place Vendôme…

A romantic universe smelling of poppy and gun powder, where profiles have broken noses and eyes are fierce. The exhibition "G.I.P.S.Y: Graffiti Is Probably Scaring You" marks the end of this gangstocratic period. In 2013, Sozyone and Jaba Mathieu team up on a 2 year adventure. Between Singapore, L.A. and Valencia, they develop, write and complete 'Enemies', a 142 page hard cover intergalactic comic book (Ankama Editions, oct. 2015). In 2015, Sozyone begins a new chapter "The End of The Empire", a carefree universe whose peaceful characters all wander casually around, almost inert, aimless but alive at the heart of a noisy city, expecting a terror attack or a tidal wave, holding on to their phones in order to be ready to capture the moment, whichever it may be.