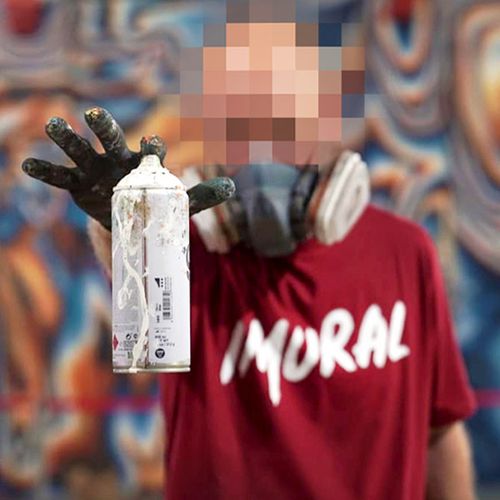 The artist behind the pseudonym SNYDER occupies a unique position in the art world. His many years of work as an architect and passion for style writing are the main driving forces behind the conceptualization of his aesthetic. He translates these into motifs that stand out for their oscillation between majestic harmony and iridescent power.

His motifs often show the fragile beauty of endangered animal species, which lend his art an auratic moment. Using spray paint, Snyder unfolds the animal as a soulful counterpart layer by layer on different media such as paper, canvas or wall surfaces with the spray can. The blurs created at the color fringes of the different layers give to the missing depth of our digital image space, a real moment of authentic wildness.

At the same time, in each of his works Snyder imitates color aberrations, so-called chromatic aberrations, which have found their way into our visual field through the analog and digital imaging processes. In this way and with the help of the blue hue of his pictures, he questions the immediacy of our visual anchors of perception. Who really knows what a real zebra or a tiger looks like in its natural environment?

Due to our modern inability to look beyond the edge of the display, we have forgotten how to look at the natural environment. Snyder’s works encourage us to relearn instinctive perceptual behavior. In order to be seen, Snyder’s animal worlds adapt their appearance to the urban jungle and attentively target every passing viewer. They develop a pulling effect that is difficult to escape as a passer-by.