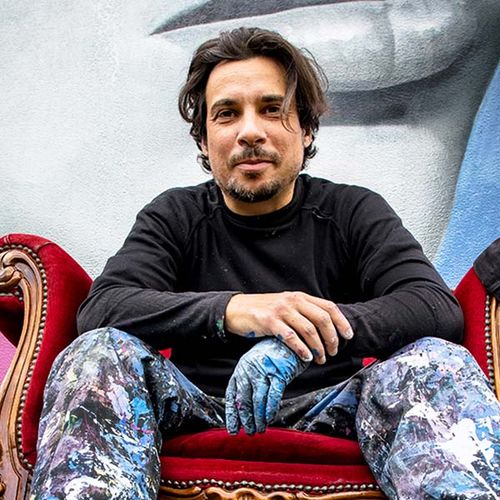 Nicolas Scauri aka SKIO is an urban artist originally from Nice, France. Skio’s first murals appeared In 1993 in the Nice region, starting with mural letterings before moving on to figurative romantic topics fed by his pop and TV culture.

Today the works of artist Skio (who studied design) are mixing geometrical shapes and realistic portraits featuring obfuscated eyes. They question our presence in the urban landscape by creating new modern and harmonious esthetics.

Inspired by Skio’s love for the Bauhaus movement and surrealism, his creations have their own style aiming for a rare balance between geometry, anatomy and color through the exploration of minimalism’s complexities. Enhanced by Skio’s proficiency with spray painting as well as paintbrushes and digital tools, his works range from large formats on city walls to canvases in his studio, as well as spatial installations.

Part of many Graffiti and Street Art festivals all over the world (Paris, London, Mexico, Shanghai...) for more than twenty years, Skio's creations, thanks to his sensitivity and sense of assembly make him one of today’s major upcoming artist.