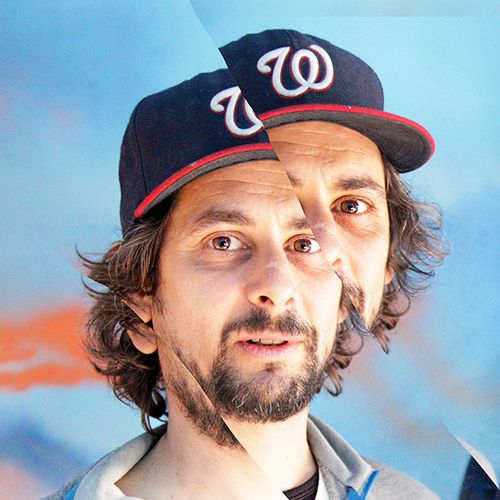 Born in 1978, REMY UNO is an artist from Marseille. He made his artistic debuts during the 90's through graffiti, which was like a game at the time. Some wastelands and railroads during the good old days of disposable cameras and audio cassettes.

In 2002, he co-created Lartmada, a collective that will allow him to be invited to paint and exhibit his art all over the world: Sao Paulo, New York, Caracas, Moscow, London, Johannesburg, Mexico City, Yaoundé... But after several years of commissioned work through his collective Lartmada, he moved to Berlin to develop a more personal expression of his painting which will give birth to his style so recognizable today.

Interested in the image as a relationship between two realities, the painter and his model, his work is focused on humans and their silent actions, those that allow us to identify without compromising ourselves. He fragments his compositions, repeats them, put them back together to get different perspectives of the same story. His narratives are simple, telling as much about irrelevant moments as the other side of the story.

Living and working in Marseille, Remy Uno works between the relative comfort of his studio where he creates his paintings and prepares his installations, and the randomness of the walls that he is invited to paint, alone or with his collective Lartmada.