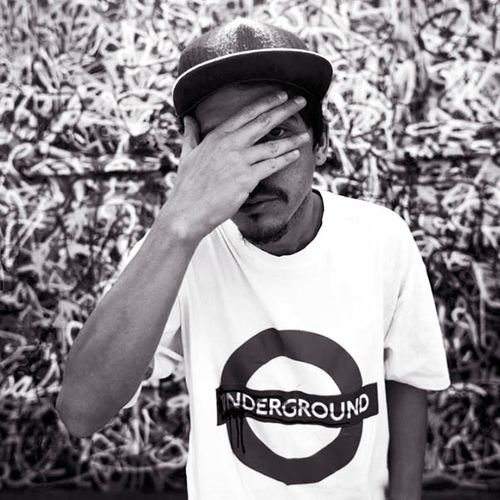 Born and raised in Bela Vista, a small town in the central region of São Paulo, RAFAEL SLIKS is a graffiti and contemporary artist from Brazil. As a kid of the 80's, he loved comics, martial arts movies, skateboarding as well as graffiti. And this is from the simple neighborhood of his hometown that he looked at the vast world through a crack in the door of his house before discovering it through his trips abroad.

From pixo to graffiti, from handstyle to tags, he arrived at the abstract essays that today mark his skills, “skills” that he uses with inverted writings led to his codename: Sliks. For him, writing is representing the spoken, the thought. “Handwriting”, poems and songs he mentally creates are reflected in his abstract ideas, tangible textures, imagined shapes. At the heart of the work, representations of his poems, songs that mirror the chaos of big cities, charms of wild nature, pure expressions and at the same time loaded with layers of microorganisms, odors, colors as well as luminsescence.

Sliks' creative equation results from his constant journey in and out of himself. In the results, the constant research, the focused study of the history of art, experiences in his studio and on the streets of the world, the creation of a personal style, which adds Lascaux's signs, oriental ideograms, Da Vinci's secrets, Magrite's daydreams, daring of Yves Klein. His work, in permanent catharsis, starts from the gesture, a great influence on graffiti, skateboarding and movements inspired by tao, oriental calligraphy and keeps abstractionism as a password, with continuous rhythm and essential look.

Heir to abstract expressionism, to the automatic writing of the surrealists, his art recovers childhood scribbles, bringing to the surface his universe of quick gestures and flashes of furtive action. His subtle figure, dressed in mystery, distributes abstractions and freehand writing through the streets, between textures and obstacles, an art that inspires, that seduces by lightness and enriches his fate as a contemporary urban visual artist.