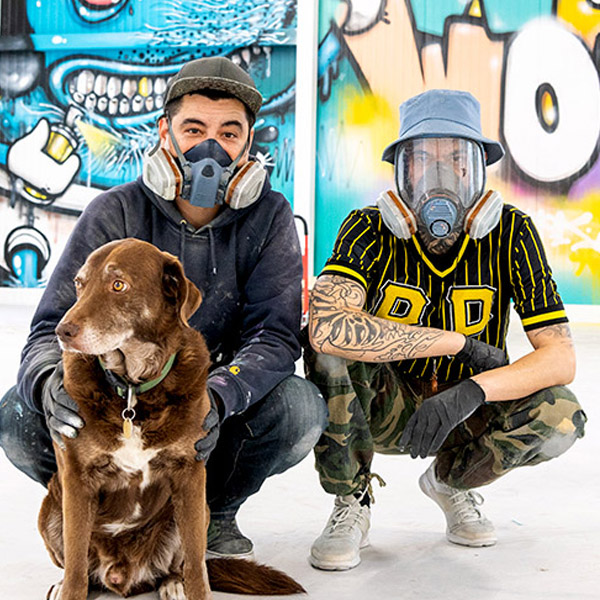 The artist duo ONE TRUTH is composed by two brothers: Dr.Drax, born in 1983 and Pase, born in 1981. The two graffiti artists live in Zurich, where they have helped enrich the cityscape with their creative and versatile graffiti art for many years. Since their youth, the brothers have been creatively engaged but they have learnt the art independently, perfected their technique over the years and developed their own style. In 2003, they decided to combine their skills under the name One Truth which immediately enabled them to gain recognition on the international street art scene.

Each work by One Truth emerges as an idea, which starts as a sketch. Pase then creates the canvas' background, which often consists of abstract landscapes made of typographic signs. Dr. Drax develops the characters and motifs. Using spray and acrylic paint, the duo works hand in hand and creates colorful paintings featuring their typical little monsters that never look frightening, but rather cute and funny. The figures often tell their personal stories such as their solid relationship, growing up without parents, as well as their dogs who have become their trademark and can be found all over the world #onetruthdog.

One Truth has done extensive work for major international clients including UBS, FIFA, Google, Red Bull and Reebok and their artworks have been exhibited in galleries and art fairs in Berlin, Hamburg, Basel and Chicago. They also won national competitions and took part in numerous international festivals and competitions, auctions sales and have been awarded by the Department of Foreign Affairs (FDFA) to the Olympic Games in London 2012 and the Expo Milano Swiss Pavilion 2015.