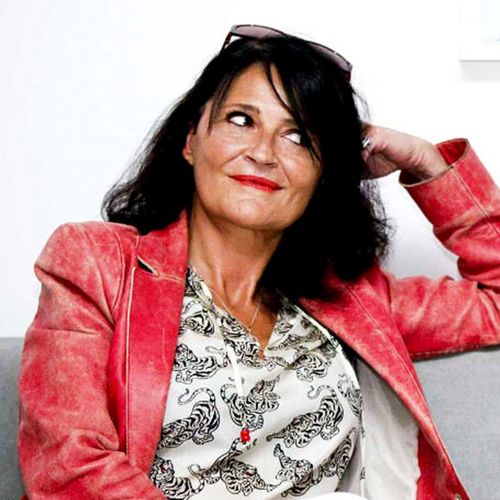 Plastic artist, poet and key of the street scene, MISS.TIC develops a pictorial universe that she paints with stencil on the walls of Paris since 1985. Drawings strong women along with incisive sentences, her creations talk of liberty. The art of Miss-Tic is a subtle mix of lightness and graveness, unconcern and provocation, resulting in a unique expression.

In galleries as well as in public areas, she mixes lasting media and fleeting interventions. Regularly exhibited in galleries since 1986, in France and abroad, asked for by the fashion circles (Kenzo, Louis Vuitton…), the movie world (in 2007, she designed the advertising poster of Claude Chabrol’s movie The Girl cut in 2), Miss.Tic as well took part in the Petit Larousse’ 2010 edition by illustrating words of French and she created in 2012 a book of 12 stamps for the French mail company, la Poste.

Shown in international contemporary art fairs, some of her works have been bought by the Victoria and Albert Museum, the Contemporary Art Fund of the Ville de Paris, the Ingres Museum and the MUCEM. Miss.Tic’s art arises from life and lies within it. Her works are directed to everybody and make the audience their regular and critical receiver.