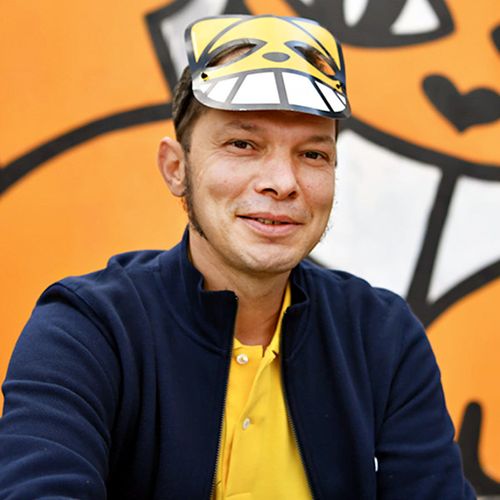 Thoma Vuille aka M.CHAT is a French-Swiss street artist born in 1977 in Neuchâtel and who lives in Paris. From 1995 to 2001, he studied at the Institute of Visual Arts in Orleans, and began in 1997 to paint his emblematic character M.Chat on the walls and roofs of the city. A true graphic creation representing a yellow-orange cat, M.Chat is a benevolent and joyful figure who always wears a huge smile and who will very quickly make his creator popular. These features and this childish spirit come from the very source of his initial inspiration: the drawing of a little girl during one of the many interventions of the artist in a school that will cause him a click.

From 2003, white wings grow on his back and the director Chris Marker even dedicates a film to him in 2004. Entitled "Chats perchés" and produced by Arte, the film was screened at the Centre Pompidou the same year and a gigantic M.Chat was painted for the occasion on the forecourt of the center. But in 2007, while the artist was painting on the walls of Orleans, M.Chat was caught in in the act by the police, arrested and then given a suspended sentence. His trial made the rounds of the regional press and contributed to the recognition of the value of his paintings.

Recognized by the leaders of the street art scene (Shepard Fairey, Banksy, Space Invader...), the reputation of M.Chat is worldwide and the artist has since been invited to the four corners of the world. The artist is now as much a part of the Urban Art world as of less "marginalized" movements such as "Pop art" and "Land art".