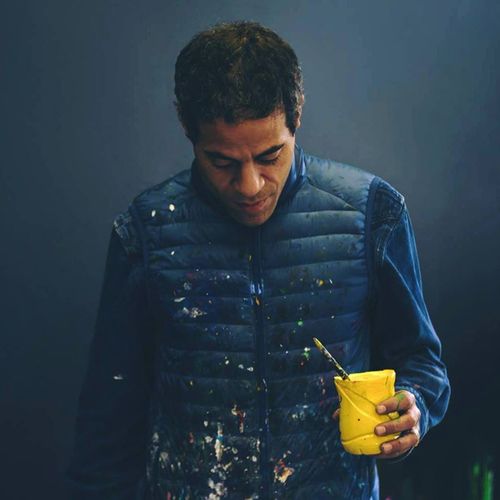 John Andrew Perello, aka JONONE, is an american graffiti artist who was born in the district of Harlem in New York in 1963. It is within this environment, where unemployment and drugs reign and where the American Dream discovers its reverse, that John is initiated into graffiti. At the age of 17, he first appeared under the letters Junk, Junkills, Bloodthirsty, Jofa, and then under the name JonOne which he adopted and which he accompanied by the number 156 in reference to the street in which he lived.

At that time, cans of acrylic painting were the less protected products in paint stores, reason why this tool will be gradually preferred by JonOne instead of spray cans. With brushes and dripping techniques, JonOne reveals a singular production that frees itself from the usual visual codes of the Graffiti movement. Between abstraction and raw expressionism, the young vandal is quickly compared to Pollock or Dubuffet. In 1984, he founded with other graffiti artists a collective called 156 All Starz which proved to be a catalyst for decisive encounters for his career. In particular, he met the French artist Bando who invited him to Paris where he decided to settle in 1987.

In Paris, he infused the original New York graffiti culture alongside the pioneers of the French hip-hop movement: Boxer, Sharp, Jayone, Skii, Joey, Shen and Solo, members of the groups NTM and Assassin. In the heart of a studio set up at the Hôpital éphémère, JonOne will try his hand at painting on canvas, a technique in which he excels and which will open the doors of the galleries Agnès.b, Willem Speerstra, Magda Danysz, David Pluskwa and finally Martine Ehmer. From the New York underground to galleries around the world, JonOne continues to be inspired by the urban jungle and draws from the city to better transcribe its energies. He now considers himself more of a painter than a graffiti artist and his works are part of the largest collections of Urban Art.

!!! Some rare and original paintings from JonOne are also available upon request !!!