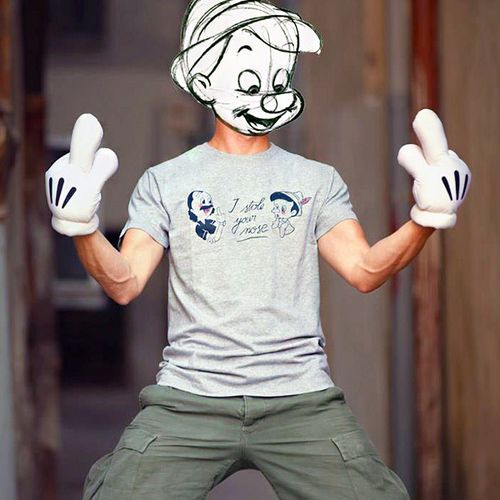 Born in 1980 in Montpellier, JONNYSTYLE is an artist who came out of graffiti, a movement he jumped into with both feet when he was a teenager. For about ten years, he grew up with this culture, adopting the good and bad sides of the movement.

He has since left the "classic" form of graffiti behind to focus on a more figurative and satirical expression. This distancing is since materializing with the use of different mediums and more especially brush painting. But he has kept the street as a playground, where he still develops his style, always with a touch of humor and impertinence.

His character of the proletarian Frenchman with a moustache embodies the underground, the forbidden, the nose-thumbing, while keeping a sympathetic approach, full of self-mockery. Since its creation in 2005, this character has never stopped evolving and he is now staged in the form of winks in a wide variety of compositions.

The opposition between Jonnystyle's street culture and his desire to summon or even challenge other cultures to make them interact has not been without its hiccups, but fortunately not without joy either... His entry into galleries in 2013 coincided with a new evolution for him and he has never ceased to create surprise with his exhibitions. Always transgressing conventions and taking care of his impertinence that characterizes him.