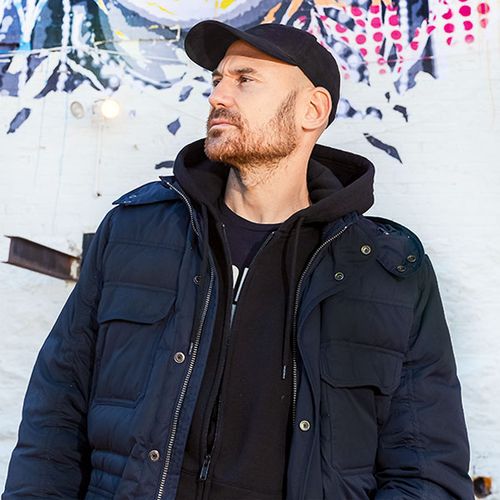 Born in 1975 in Seine Saint-Denis (Paris), the artist JO DI BONA is an emblematic figure of the Parisian Street Art scene. After a period of vandalism under the pseudonym Anoze in the 1990s and a musical period from 2000 to 2012 in the rock band Hotel, he returned to graffiti in 2013 by developing his own technique: Pop Graffiti. This technique will enable him to achieve dazzling success very quickly on the art market.

Jo Di Bona combines collages with various influences from Graffiti and Pop culture. As a modern-day Fauvist, he mixes colors and movements to create faces full of poetry, emotion and joie de vivre. In his works, He pays homage to icons and great figures of history with the same tenderness as he does with unknown strangers, nourished by the generous look he has on human beings and friendships he has with them.

Awarded by the prestigious 1st Prize for Graffiti from EDF Foundation in 2014, Jo has since been involved in numerous international exhibitions, performances and murals. Particularly his many large-scale murals in Paris, his huge artworks for the Immigration Museum in Paris, the Loures Arte Publica in Lisbon and the French Consulate in Atlanta. Not to mention his presence alongside his galleries and during international art fairs in NY, Miami, London, Hong Kong, Lausanne, Madrid or Munich...as well as his murals during the Street Art for Mankind exhibitions in New York (2017) and Miami (2018).

Jo Di Bona is a committed artist, who shows his convictions in his works or through the projects he is part of. He defends family values by supporting Emmaüs, Secours Populaire and the Pièces Jaunes in France but he also takes up other current issues such as the Syrian migrant crisis, the LGBT+ cause, immigration and the female cause.