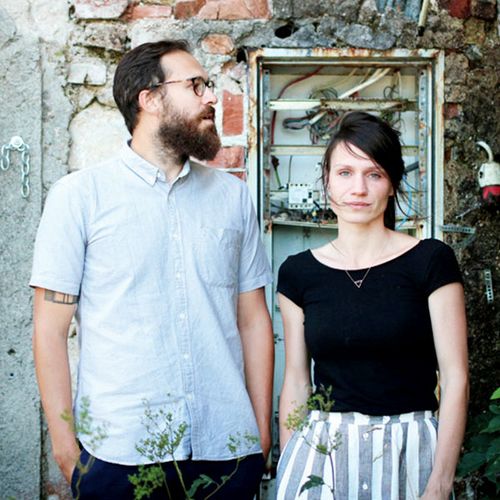 Austrian and French street artists Jana & Js (Jean-Sébastien) are painting together since 2006. The pair create polychromed stencil murals widely ranging in size. Based primarily on their personal photographic work, the stencils seem to respond and interact with their surroundings. Mostly inspired by the city and people living in, their paintings merge urban landscape with portrait, questioning the place of human in modern cities. Inspired by the place where they put their work they now focus on nostalgia, melancholy.

After spending some time in Madrid, Spain where they met and living a couple of years in Paris, Jana & Js are now settled in Laufen (Germany) a small Bavarian town close to the Austrian border. To display their works, they choose old materials that showcase the passing of physical time and history. They have made their art in unexpected spaces by printing stencils on public infrastructure or on dismantled products or abandoned spaces such as train tracks, old buil- dings, poles, pieces of concrete, old trucks, wood piles...

They are deeply inspired by every place they travel to, deciphering the social meaning in unforeseen aspects of urban landscapes. But what is the most striking part in their works are not panoramas themselves, but people with their existential uneasiness. They have the unique way of relating people, their emotions, desires and concerns with their environment. Their urban interventions merge their subjects with the environment, provoking thoughts and engaging the viewers in an artistic dialogue.