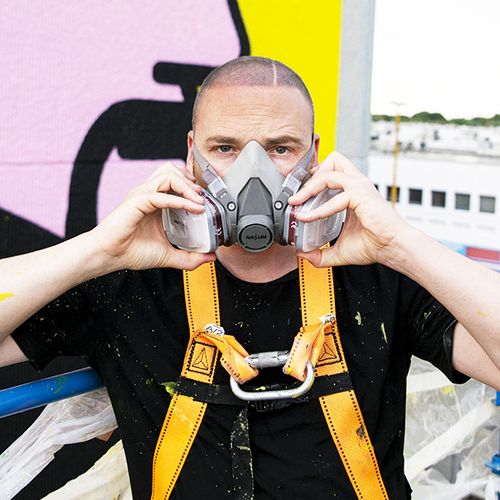 Born in 1980 in Naples, IABO is a contemporary artist who started as a graffiti writer in the early nineties. Since 1997 his artistic curiosity drives him to the United States, where he got in touch with the underground scene and artists but he always kept a strong tie with Naples, the city where he lives and works. In 2003 he enrolled at the Accademia di Belle Arti in Naples and graduated in Visual arts in 2009 with honors. In 2004, he had his first solo show in Rome and then participated in many group shows in Italy.

Iabo gradually approached the world of mainstream art, by experimenting techniques that became themselves part of his distinctive signature and provocative style. He explores techniques that belong to the Writing and Street Art, such as spray can and stencil, and he is not afraid of testing with plexiglass, a material that seems the best one to express his philosophy, thanks to its superior enhancement of the composition lines.

His characters, with big, curious, and vaguely naive eyes, disseminate, without filters, ironic messages that evoke into the viewer feelings of alienation and pleasure. Another typical trait of Iabo’s style is the creation of artistic projects as “work cycles”: there is always a dominant theme that he multiplies into different possibilities.