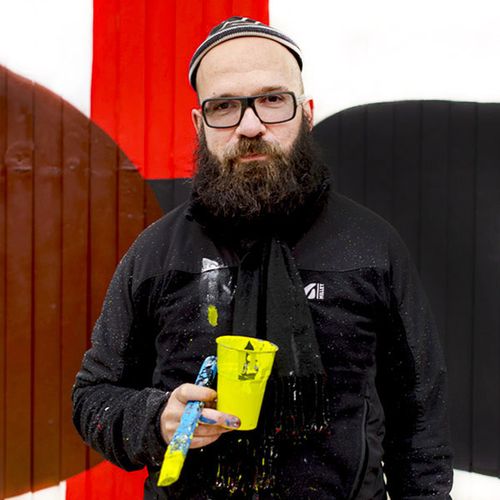 Born in 1972 in Paris where he still lives and works today, Cédric alias HONET is an artist with multiple personalities. Graffiti artist for a quarter of a century, worldly illustrator for Prada, Lacoste or Louis Vuitton, collector of ephemeral moments, archivist of urban curiosities, initiate to the secret and mysterious Paris, labyrinth explorer and great traveler, Honet opens the doors of his cabinet of curiosity, in a farandole of pictures sometimes naive and romantic, sometimes gothic and worrying.

The artist rules out completely the idea of introducing sensu stricto graffiti in the exhibition area. So when he's not collaborating with a brand or showing his paintings in an art gallery; he considers graffiti in his own way, that is to say like a practice: an "act" and not just its result. Graffiti is recorded as an act with "symbolic" nature, a day-to-day action. He joins gothic illustration mostly inspired by his life in movement together with the romantic exploration and recycling of abandoned, forgotten and hidden places.

As a true scientist of writing and more broadly an explorer of unusual images, Honet mystifies languages and alphabets, which have always been objects of his fascination. Destabilizing the boundaries between art and language, Honet translates in his work his graffiti culture and a vision of the world through clues disseminated in a very playful way. In a search for the perfect balance between the issues of the modern world and the heritage of the past, he signs his work with multiple meanings, and delivers plots to be deciphered like an archaeologist wishing to sublimate the ordinary.