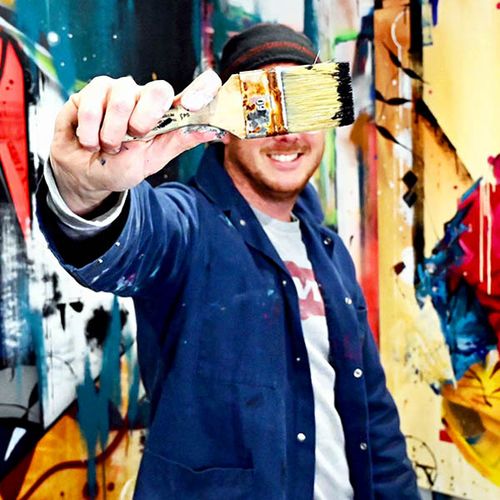 Born in 1986, Renaud Reine aka HOMEK is a graffiti artist from Normandy who lives in Lisieux. He has been immersed in drawing since a very young age thanks to his family and made his first approaches with urban cultures in the early 2000s, when he started to travel around France and other countries to put his mark under his name of graffiti artist.

Since 2012, he has been crossing European borders to share his art in the streets and schools from disadvantaged areas, mostly with children. With a large number of murals to his credit (+1000) and an important period of creative experimentation on canvas, the style of Homek has evolved to a more graphic, contemporary approach full of bright and dynamic colors but always driven by an authentic "graffiti" touch.

Returning to the basics of the letter, making it dynamic and abstract, in warm decorations reminiscent of his travels in Africa. Homek adapts to the themes when they are imposed by symbolically integrating a central motif, sequenced of tears or graphic separations, illustrating in each of them a different atmosphere or material.

The tears evoke the different scenes of an illustrated story. It thus varies figurative motifs, flat colored areas, soft gradations and atmosphere of "tagged" walls. According to the geographical location of the realization, Homek adapts its color chart to local colors.