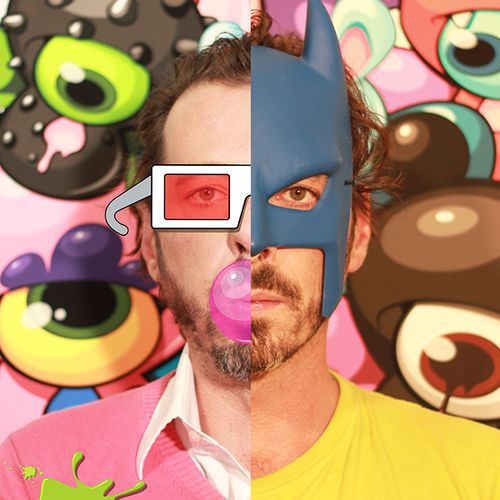 Born in 1976, GUM is one of the most representative artists of his generation. Graffiti artist in the 90's, he has known the great periods that have transformed our urban spaces. Since then, his inimitable talent has been exhibited in France and Europe.

Armed with his secret weapon, the spray can, Gum tries to fight the various diktats of our society. A smooth and sanitized world where the single thought becomes a norm. With his ironic works, he seeks to shake up consciences and free them from all oppression. He plays with the prefabricated codes, turning them around to shape them in his own image.

A pop and colorful universe where childish, sensual and even sexual references are omnipresent in his work. He doesn't want to grow up, he wants to stay in an imaginary world that he has created from scratch in order to protect himself from the ambient absurdity. This ambivalence between eroticism and children's toys sometimes earns him the title of provocative, shocking or even transgressive. After all, isn't that the aim of all art, to arouse a reaction, an emotion specific to each individual?

Gum surprises with its strong and striking messages, but also with its technicality that has been refining for over 25 years. Heir to the street, Gum is a complete artist. Year after year, he has built a real reputation in a tough environment. His career path and his authenticity have led him to be respected by all, institutions as well as the general public. Gum is a confirmed artist who is evolving into contemporary art, pop art and urban art.