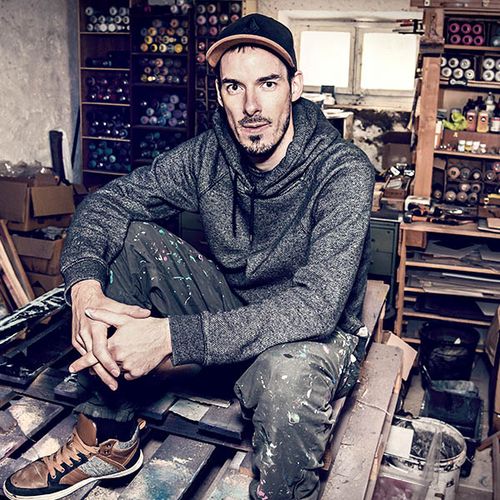 GRAFFMATT (born 1986) is a french urban artist currently based in Chambery, in Savoie. He has been drawing since his childhood, but it is only in 2010 that he started painting graffiti, firstly in abandoned places and then collectively in public spaces. After obtaining his degree in Visual Communication in Lyon, Graffmatt worked as a graphic designer until 2018 when he decided to leave everything and devote himself entirely to painting. It is in the streets that he finds his inspiration and then transmits it on canvas or on walls.

His main source of inspiration is the urban scene, the reflexion of the society in which we live, a landscape in perpetual motion. During his travels, Graffmatt immerses himself in the urban hustle and photographs people in their environment. He realizes that Human fades into a setting that is supposed to reassure him while he pays less and less attention to it. Between portraits and urban landscapes, his work illustrates the frantic pace of our current society, with movement as the common thread of his work.

His attraction to graffiti combined with the technique of graphic design has allowed the artist to forge a style where drawing has a predominant place in his artistic work. Using black and white, Graffmatt also employs the expressive potential of fluorescent color to create a perception of frailty and potency. This search for contrast and dynamism leads him to mix acrylic and aerosol, and to add several textures to immerse the viewer in an atmosphere that suggests both sensuality and vulnerability.