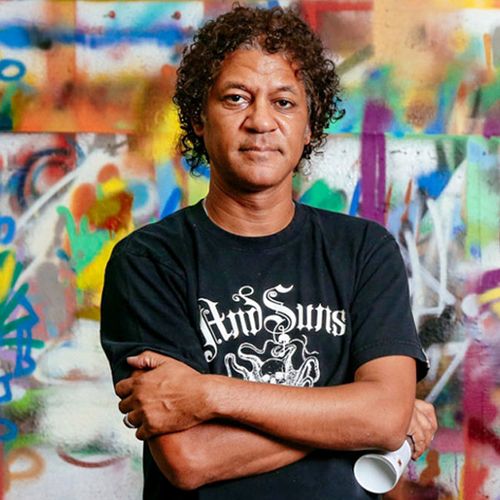 Chris DAZE Ellis was born in 1962 in New York City. He began his prolific Career painting New York City subway cars in 1976 while attending The High School of Art and Design. He remains one of the few artists of his generation to make the successful transition from the subways to the studio. His first group show was the seminal “Beyond Words” at the Mudd Club in 1981. Soon after his first solo exhibition was held at Fashion Moda, an influential alternative art space in the South Bronx. One year later the Sammlung Ludwig, Aachen, Germany acquired the first of several paintings for their permanent collection.

Alongside these exhibitions Daze has completed many public art projects over the years including: mural for The Star Ferry Terminal in Hong Kong in 1993, completing the design for an entire train station alongside artists Lee and Crash in Hannover, Germany, in 1995, mural for the Dreamland Social Club, Creative Time, in 2004, art consultant for Biz Luhrman’s Netflix series,”The Get Down”, 2017, commissioned mural for the law firm, Cleary, Gottlieb, Steen & Hamilton, Washington DC, 2018.

In addition to the many public projects completed, Daze has successfully worked in collaboration with students since 1994. He has worked in communities within various cities such as New York, Seoul, Korea, Baton Rouge, Louisiana, Rio de Janiero, Brazil, Palaia, Italy, Port au Prince, Haiti and Andover, Massachusetts. He is a regular contributor to the Leap Arts Program and Thrive collective in New York.

Daze’s paintings have found themselves in many private collections including Eric Clapton, Natalie Imbruglia and Madonna. His work can also be found in the permanent collections of The Whitney Museum, NY, Museum of Modern Art, NY, The Museum of the City of New York, The Ludwig Museum, Aachen, Yale University Art Gallery, New Haven, and Addison Museum of American Art at the Phillips Academy.