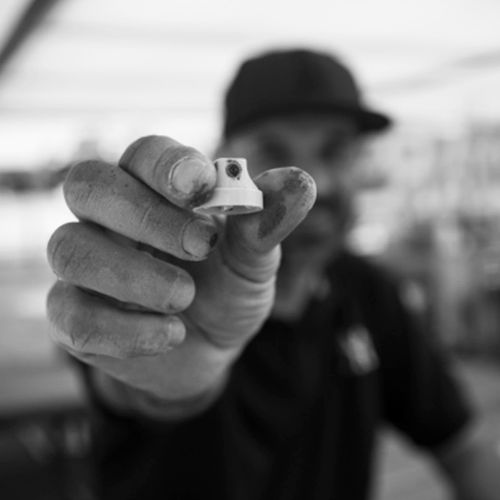 Born in 1973 in Champigny sur Marne, CREY132 is a visual artist who started by graffiti. From a very young age, he discovered the world of comics and quickly began to develop a passion for drawing. As a teenager, the Hip-Hop movement is obvious to him, and he became an actor under the pseudonym Cartel2. In 1989, after having attended the creation of a mural by Mode2 in his neighborhood, graffiti became a real revelation for him, a passion that will never leave him. He then became CREYone. After many years of activism in graffiti, the taste for elaborated murals comes to him. Thus, he naturally devoted himself to the development of urban art by founding the association "Ligne 2 Mire" in 1998 and then by joining the 132 crew, which led him to become Crey132.

In 2000, while continuing to develop his murals, he also developed a passion for graphic design and deepened his knowledge in computing science. He made several record covers (IV My People...), various visual identities for T-shirts (NTM...) and a lot of merchandising for the Warner Music Group (Avatar, DC comics, Harry Potter...). In 2003, he became a member of the board of directors of Emmaüs Synergie, thus marking his involvement in the life of city suburbs and taking part in numerous humanitarian convoys. For 15 years, he led artistic workshops for children in the heart of the City of Joy (Paris).

But in 2012, the artist decides to devote himself to his work on canvas. The spray can, more than a technical tool, becomes his DNA. From the wall to the canvas, the finesse and precision of his strokes plunge his works into a great realism, where only emotions are expressed, like windows of life, revealing urgent messages linked to our society. He exhibits his work in various contemporary art fairs, in "Street Art City" and obtains several awards. Since then, he has never stopped refining his technique and his artistic signature, whether it is on the walls he creates or on the canvases he exhibits.