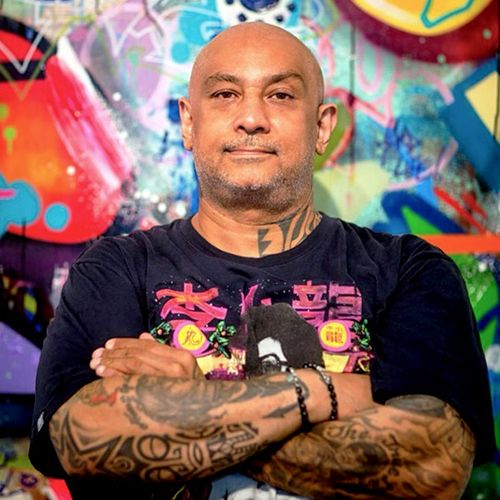 Born 1968 as Fernando Carlo Jr, COPE2 is a graffiti artist from New York. His paintings have been exhibited in solo and group exhibitions in galleries and museums throughout the United States and internationally. He is a self taught artist who is a celebrated legend contributing over 35+ years to the graffiti and street art culture. One of New York City’s most prolific graffiti artists, he began tagging his name in the South Bronx in 1978. He developed his style painting his name Cope2 on the NYC subways and streets of the Bronx creating graffiti productions and murals throughout the 1980’s and 1990’s and even today achieving international recognition for his distinctive authentic raw style.

In recent years Cope2 has been commissioned by Time Magazine, Converse, Adidas among others. His work has even crossed into the virtual realm with appearances in video games such as Marc Eckos: Getting up and Rockstar Games: Grand Theft Auto IV. Today, you can catch Cope2 in the studio painting, bringing his raw energy into abstract expressionist style masterpieces, intertwined with his trademark bubble letters and tags on canvases. Cope2 crosses between art world, mainstream and street culture alike.