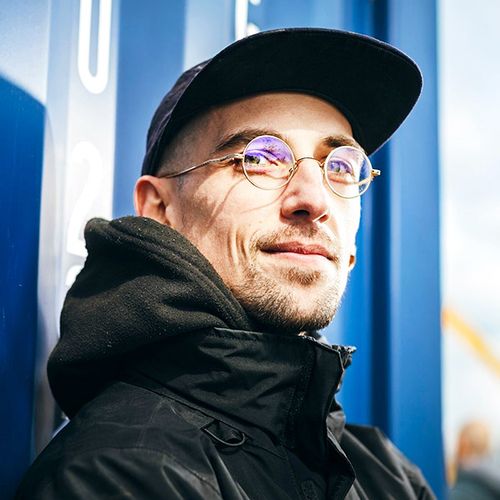 Born in 1989 in the outskirts of Rouen, CAMILLE BOULARD, also known as PRISME, is a contemporary graffiti artist. He spent his childhood in the countryside and discovered graffiti in high school thanks to his cousin, who had been practicing Graffiti in Paris since the early 1990s. After passing his high school diploma, he joined the art school of Le Havre in 2006, in the graphic arts and interactivity section, met the local graffiti scene and turned towards a more "vandal" practice.

Camille Boulard then moved to Lille and got closer to Flow (Euroregional centre for urban cultures) and the Maison-folie Moulins where he did an artistic residency in 2014. He gradually freed himself from lettering and moved towards the creation of "wild" or commissioned murals. Under the pseudonym Prisme, he thus pursues a double artistic practice in the public space: continuing to do graffiti while developing a mural work fed by his experience as a graphic designer and typographer. On walls or shopkeepers' curtains, he elaborates abstract and geometrical forms in a lively and dynamic palette.

But it was in 2017, when Camille Boulard returned to Rouen, that he got closer to the Lucien collective and that his activities allowed him to be spotted by the Outsiders gallery. The gallery directed him towards the creation of canvases which were at first and foremost resolutely pop, then he gradually experimented with new forms and transposed his experiments onto canvas and zinc plates. Returning to abstract, he thus develops a synthesis between the activities of Prisme and his studio work.

Like his murals, his canvas and zinc pieces intend to be sensitive to the passage of time. By using water or acid corrosion, the artist creates artworks whose completion does not freeze the form. Thanks to their characteristics, they evolve beyond their creation, according to a temporality that escapes the artist, and that’s what is all about: the most sensitive heritage of Graffiti lies precisely in its acceptance of a certain degree of entropy.