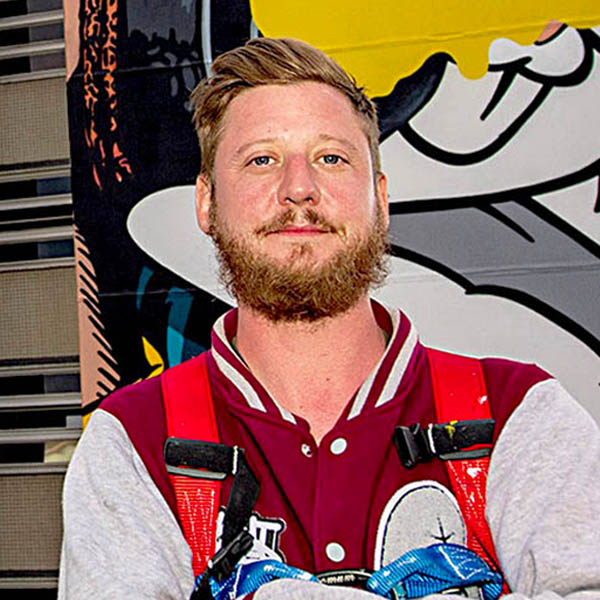 BUSTART is a swiss artist who lives and works in Basel. In 1999, he began his artistic career with classical graffiti. Then, in 2005, he combines letters and cartoon characters, making his art more figurative. By adopting a new range of techniques and skills, he manages to develop new styles in his artistic research. His many travels have allowed him to communicate, to surprise passers-by, encouraging them to reflect and share his love for colorful urban spaces. Leaving his marks in major cities around the world. Cartoon characters have continued to gain importance in his art until they became more important than letters. Without ever abandoning the essence of graffiti, this process became the basis of his artistic development. In 2008, BustArt focuses on his stencil work. He has mainly spray-painted posters that he pastes all over the world.

Afterwards, BustArt lived in Amsterdam, allowing him to concentrate totally on his art, and was elected by Time Out Amsterdam magazine as one of the 50 personalities who have left their mark on this city in 2011. His evolution paved the way for his new style: pop graffiti; a mix of pop art, classic graffiti, cartoon characters and color effects. Giving birth to the artist's own compositions, taking him to the next level in his artistic evolution. Combining techniques, styles and designs, BUST is constantly developing in his work and through his skills, his style, in his own forms and variations.

Influencing his art as much by the mastery of his self-taught techniques, as by the use of cartoon characters from his childhood. As a neo pop-art artist, he extracts characters and icons from their contexts to give them a broader meaning through new compositions, constantly researching and learning new techniques. In order to apply them to the development of his art and to his next works in his studio as well as on the street, where he is always very present.