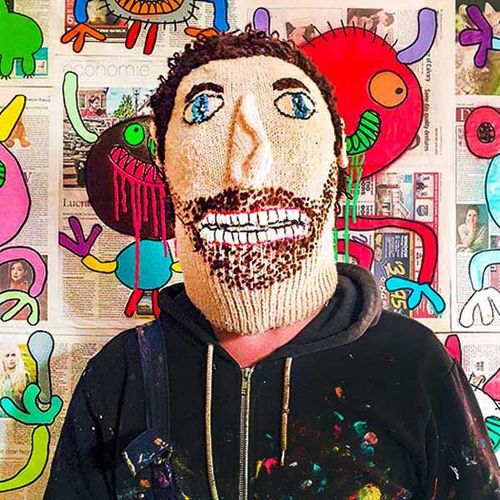 Born in England where he bursted onto the street art scene of East London in 2007 with his bright coloured characters painted on newspaper, BORTUSK LEER is since living and working in Amsterdam. His work has appeared on and livened up numerous streets, gallery and home walls in places all around the world. From Argentina to The Netherlands, including India and North America to name just a few.

Fed up with people being angry, disappointed, sad and disillusioned with life, Bortusk Leer sees it as his duty to brighten up the world and spread some happiness. Over a decade Bortusk has developed a signature voice and style, creating manic, euphoric creatures (his monsters) plus other lively abstract pieces, videos, TV shows and numerous psychedelic assemblages of Neo-Pop-Art-Brut.

Fascinated by the Cobra-movement, inspired by futuristic heroes and influenced by all the children of the world, Bortusk Leer became the founder and leader of Art Comedy. He’s still the only member though as far as we know. His aim is not only to create as much art as he possibly can, but also to put a smile on everyone’s face and spread some positive emotions whilst doing so.

Living like everyone else in a world of division, suspicion, distress and virus lockdowns, Bortusk Leer looks beyond this, some say his mission is naive while others bless him for it. He does not fear naivety, he fears cynicism. Loudly and gamesomely he attempts to question our mental, social and political barriers. He tries to disrupt our fears and our expectations, his work challenging the inner child in us all to come out and play.