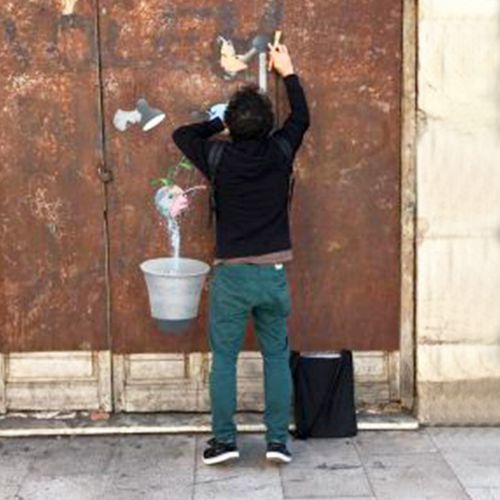 Born in Figueres in 1985, BL2A aka Baldosa currently lives and works in the city of Barcelona, where he meticulously applies his relatively diminutive street art among the urban landscape. He firmly believes that the author should not be more important than his work, reason why he prefers to evolve with anonymity.

The artist is convinced that the street is the most free and democratic space to exhibit his art. As an urban artist, BL2A started to exhibit his art shaping his works in tiles that he rescued from the streets to fix them later back in the streets again with his signature. Although the artist has evolved and experimented with other supports, the origin of the name with which he signs is the result of this initial support.

BL2A manages to turn its imaginary faces into a multitude of elements that, combined with everyday objects, allow them to acquire singular meanings totally different from those we might initially expect from a portrait. One could say that the maxim “share your mind and cultivate it” is the underlying message behind his work.