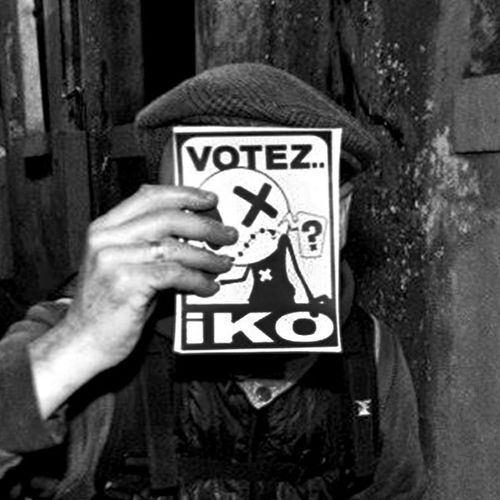 Born in 1970, ARSEN is a French artist who began his artistic career as a graffiti artist. He started to put his first IKO characters in the street about 15 years ago, using stencils and collages to bring life to a wonderful universe. His mediums have then evolved through the time, from walls to paper, and then from canvas to wood. Always pushing the limits of his imagination to try new techniques and ways to express his art.

His troublemakers sow chaos and graphic order and are a way for the artist to transmit simplicity. Black and white, accompanied by a few colors in clear and contrasted flat tints. That's all Arsen needs to express his world. Although his paintings remain his main creations, collages, stencils and murals are always present in his work, whether in the street or through the customization of different type of objects.

He is known for his iKO black and white characters, they evolve in a refined world mixing logos, pictograms, signs of all kinds and symbols of the consumer society. An ironic and absurd universe, between manga and graffiti, which presents them as modern icons.