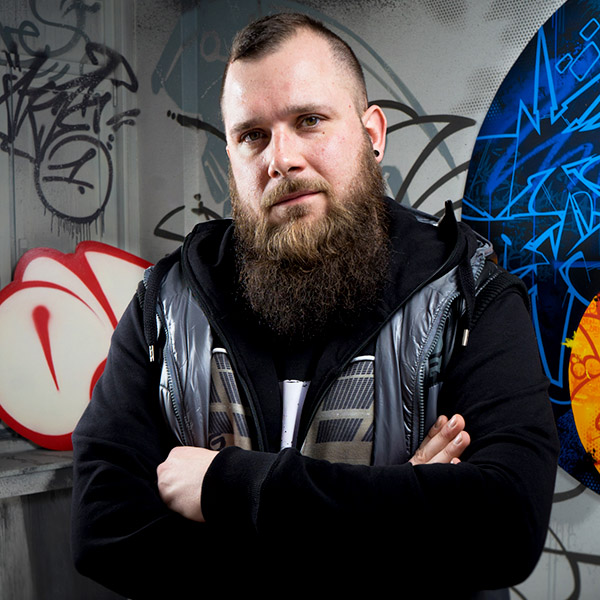 AKTEONE discovered graffiti during his youth in Berlin at the beginning of the 90s, and later, as a member of crews including TLB, began to paint graffiti in the urban realm. Over the course of 25 years of productivity, he became known within the scene for his graffiti art, proved his talents as a rapper, produced albums, and today belongs to the established representatives of the Berlin Hip Hop and graffiti scene. On top of his creative work, AkteOne’s ambitions is to pass this culture on to the next generation.

As a trained billboard and neon sign maker, AkteOne was strongly influenced by typography and employed it in his creative work. He constantly developed lettering styles via sketching as well as graffiti, and invented his logo [a!], which now can be found in almost all of his works. Parallel to his career in the urban realm, AkteOne discovered the small format of the canvas and has used it for new experiments in the studio and to develop additional new techniques.

Lettering and hand styles continue to remain the focus of his studio work. Just as on walls, words on the canvas appear in a sketchy, two-dimensional wildstyle or in three-dimensional formations on abstract, colored backgrounds that he creates using acrylic or aerosol. The marker remains his tool of choice for drawing, with which, for example, he meticulously traces outlines that divide the abstract background into chromatic, geometric zones. Additional brush strokes as well as the traces of drops allow multiple layers and color fields to emerge and create space.

Freely and full of variations, AkteOne has developed in the studio pieces a style of “assemblage painting,” through which abstraction and the application of mixed techniques allow colorful compositions to emerge out of wildstyle letters, comic figures, tags, color fields, stripes, scratches, paint spurts and drops. The dense multiformity of AkteOne’s paintings rewards extended consideration from the viewer, and the embedded “quotes” from the graffiti lexicon evidence a deep internalization of Hip Hop culture.