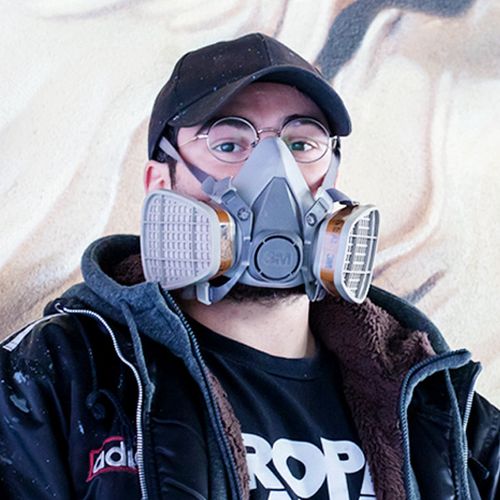 Originally from Brussels, PIET RODRIGUEZ is a self-taught artist who began his artistic career in 2012 by discovering a deep passion for painting. After studying hotel and catering, he turned to studies in advertising which attracted his attention thanks to its creative aspect. But at the end of his studies, an exhibition of amateur painting gave him the desire to take a canvas and try his turn. This was a real revelation for the artist.

Influenced by the great masters of history, he then began to paint realistic portraits and other compositions, between surrealism and symbolism, before turning to his favorite subject: the statues of Greco-Roman mythology. He started working mainly in black and white, but the charge of history as well as the materials like marble, copper, bronze and the way the light reflects on them quickly becomes a fascinating subject for the artist.

Then at the end of 2015, the Propaganza collective introduced him to spray painting as well as the world of Street Art. A new technique and a whole new world in which he intends to distinguish himself. By painting old works on the walls, his objective is "To put these works back in the streets so that everyone can contemplate them seemed to me to be a fair return because these works are for the most part either locked up in museums, or reserved for an elite", which makes him a committed artist with an authentic approach.