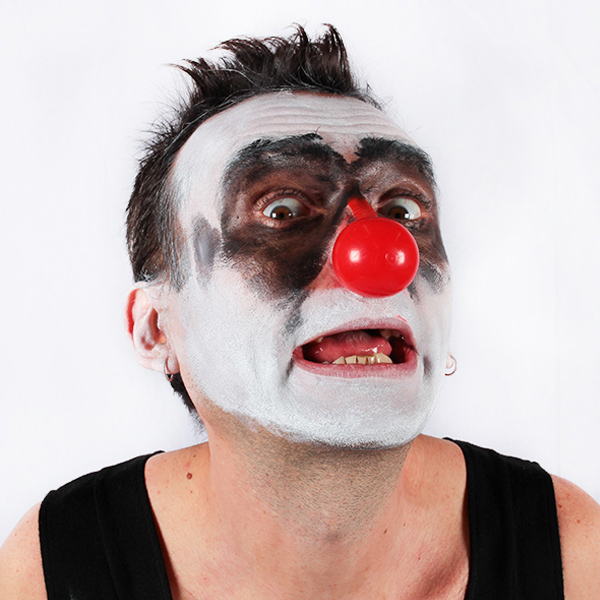 The committed and singular way of working of MIMI THE CLOWN subscribes itself to a sociological, anthropological and social commitment. It denounces the hypocrisy and the demagoguery of the political classes, the ignorance of misery, the cynicism of our leaders, of religions and the absurdity of a world that breaks down instead of building up. But it also praises the creation and the positive energy that result from opposing it; of the arts and music. All these themes are elaborated by the artist to define the ongoing failure of a world in which you must try to stay upright and continue to think and learn to react.

Confronted with this surrounding “saditude”, as the artist defines it, Mimi the Clown wields “spectacular graffiti”, mixing humor, the universe of the circus and social commitment. His sarcastic and provocative stencils cover the walls of our streets. Between political messages and apocalyptic visions, the artist applies his virulent criticism of the consumption and spectacle society. Always preparing his backgrounds on several layers of acrylic, as so many pretenses of old illustrations that the words of the artist cover up, he plays with piled up dimensions of graphics and meanings.

In his manuscript collages with neo-punk aesthetic, the artist often figures as his alter ego; a preacher, a bearer of rage and social demands. The red nose then becomes the leitmotiv of a way of thinking that defends freedom and humor, that uses public spaces as places of expression and that praises language as a necessary way to react when you are faced with the discomfort of a world that wants to suffocate poetry and creation.