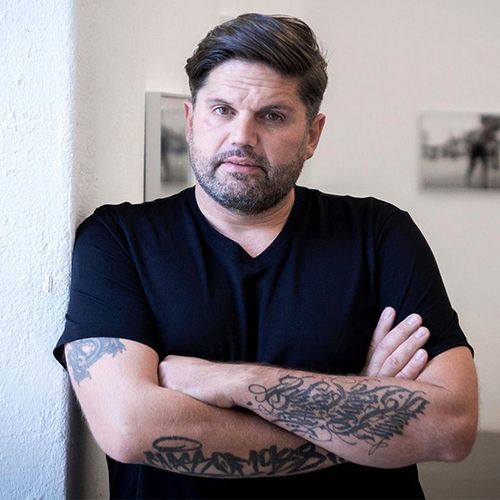 Markus Genesius also known as WOW 123 is a German artist who has performed for many years on cities’ walls. Like the great Picasso, whom he admires, Markus wanted to perfectly master the art of drawing before shifting to the less easy form of abstraction.

For several years now, Markus Genesius has been using the test picture PM5544 19 1966/67 (developed for Philips by Danish engineer Finn Hendil) as a paradigmatic reference to everyday implementation of the constructivist approach and real art. It is his basically gestural imagery, characterised by graffiti, that gives rise to a wonderfully individual declination of the principle theme – tested for any formal abstract content it might have, though remaining recognisable throughout.

In his most recent series of displays, Markus Genesius takes the viewer through the process of abstraction in three-dimensional objects, which, in view of their formal nature, seem to backtrack to their constructivist principles. By focusing on the aesthetic, retrospective character of the television test picture, hardly shown now, and which has become representative of a slowly disappearing medium, he shows that cubistic variations on the motif also call into question a society influenced by media, in which generally recognised references disappear, replaced by a series of increasingly individualised innovations and additions.

The blueprint of media instrumentalism that the television test picture represented for at least two generations functions as symbolic declaration in an era of continuous access to mobile media, and as the virtualisation of human existence. Particularly as graffiti in the public arena or temporary exhibits in art institutions – the works of Markus Genesius demonstrate how relevant constructivist ideas can be in our times.