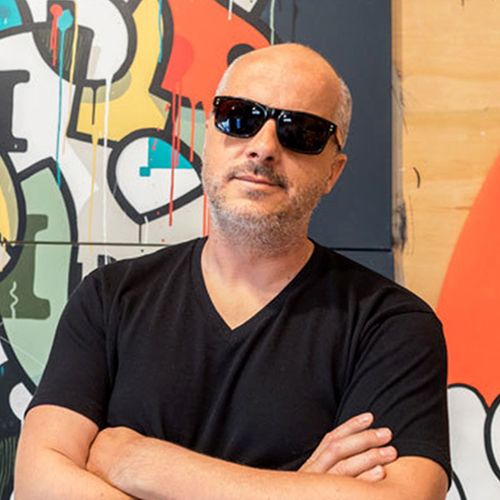 Also known as Flavien Demarigny, MAMBO was born in Chile in 1969, from a Hungarian mother and French father. He grew up in Latin America and started his artist career in Paris. He lives and works in Los Angeles, California.

He became a creative mind by doing graffiti, paintings and installations, inspired by music and 80’s Pop and New Wave cultures. He was part of ‘La Force Alphabétick’ collective from 1986 to 1996, as well as ‘Le 9e Concept’ from 1999 to 2011. Mambo did intense graffiti mostly from 1985 to 1992 but always had a simultaneous studio practice. He spent many years working as professional muralist and became Sol LeWitt’s assistant in France for his Wall Drawings in 1994/95. His murals took him all over Europe (France, Italy, Spain, UK, Holland, Belgium) to India, Senegal, New York and Chicago.

Mambo is a polyglot artist, capable to pick what he needs on his languages palette to express his feelings in the moment. His different artworks series go from semi-abstract graphic interplays of lines and spontaneous designs (Brainology series), to abstract action painting (Strokes series) as well as minimal portraits (Humans series) using his signature red-orange color, thus creating an expressive graphic universe, full of underlying meanings, combining observation, ambiguity and humour.

The core theme is humanity, the inspiration is our brain, our mental processes, sensations, emotions, memories, inner feelings and mechanical reactions. Human behaviors become colorful ideograms, our environment becomes a dictionary, where he picks symbols to write his own prose: visual enigmas, combining intuition and maitrise.