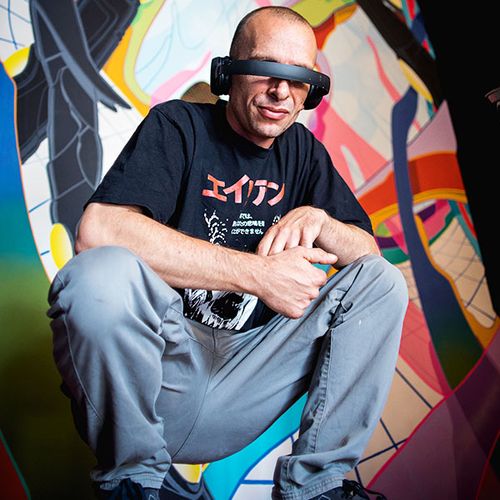 Born in 1978 in Ambilly (Haute-Savoie) and since based in Lyon, LOODZ is a French artist who has been practicing graffiti since 1997. Having grown up in a place where culture and creativity were lacking, he started drawing at a very early age and quickly found his inspiration in science fiction comics.

Self-taught artist, Loodz's early years were driven by freedom and disorder, coupled with a quest that was accomplished through painting. In constant search of improvement and experimentation, the result is a work without illusion, but with a mastered gesture and an affirmed direction. Reminiscent of futuristic animations or a projection of an uncertain future, Loodz' work is above all the synthesis and expression of a talented artist.

In 2006, he started a studio approach to experiment his art on canvas and push his quest for perfection a bit further. In 2010, he professionalized his activity and started to show his work through his first exhibitions. Used to creating with spray cans, this is thanks to his encounter with the artist Pro 176 in 2014, whom he already considered as a master of the style, that he learned to use acrylics, his work then becomes more abstract.

Loodz’s universe tends to a futuristic and speculative aesthetic, an extension of the graffiti he defends. Through the use of archetypes, he tries to decipher the unconscious process that drives him, in the form of narrative abstraction. Everyone can see in the artist's creations his own vision of the future.