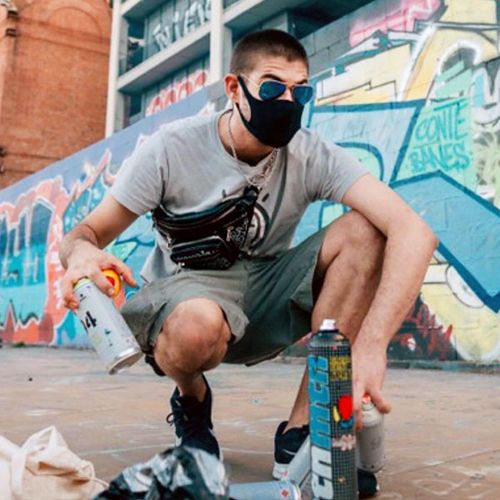 Born and raised in Barcelona, KONAIR, also known as Onergizer, is one of the most recognized street artists of the Spanish artistic scene thanks to his iconic bitten ice cream that you can see painted all over the city.

Being 30 years old, the artist has already been spreading his art around the world over the past 15 years while he did not yet know very well what was the meaning of Street Art or perhaps even art itself. He has been forging his peculiar conception of the same by painting first in the streets of the city of Barcelona, then in Europe and recently in America meanwhile he would interact with a huge number of artists during his travels. Since then, Street Art allows him to claim the freedom of public space, like an escape valve and a way of feeling alive in such a diverse, morbid and controversial world.

His particular and iconic bitten ice cream – or the bite itself – has been transformed and sometimes synthesized in icon of the international culture or in other diverse forms with influences of pop art, surrealism, graffiti or simply what inspires him from life. He has painted with prestigious artists in the world of Street Art and Graffiti like El Pez, El Xupet Negre, Birdie or Kamil Escruela, has exhibited quite successfully in galleries and has attracted the attention of the national and international media in a multitude of occasions.