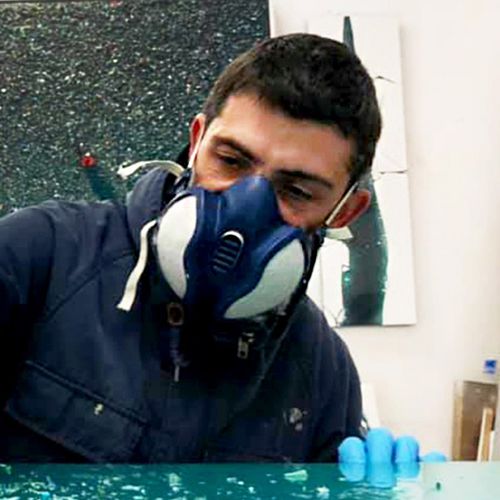 Coming from the graffiti movement of the 2000s, HIEN has started to paint in Nantes when he was initiated to the various disciplines of graffiti. After studying graphic arts, he moves to Montpellier in 2011. Eager for discoveries, he experiments in parallel of graffiti and his job as a graphic designer, new media (illustration, 3D printing, installation ...) to develop his universe, and presents his first solo exhibition in 2015.

A child playing with an adult look. His works, made of accumulations and details, are inspired by the universe of his childhood, science fiction and comics. His scenes seen from above with a "bird's eye view" refer to the views of drones and video games. Is the human race on the verge of extinction? Global warming, sea pollution, dystopian future? So many committed topics, illustrated with sarcasm in his "projections" of the world.

Playing with scale, he composes miniature & minimalist sets translating the fragility of humanity through poetic scenes. He systematically incorporates his character in combination modeled and then printed in 3D. The human being is placed at the heart of his narration. Everyone can identify or distance themselves from this faceless figure that leaves room for interpretation. The experience of the spectator is essential, witness of the scene, he makes the work live according to his point of view. As a multidisciplinary visual artist, Hien today confronts himself with many techniques: resins, polyurethane, paint, 3D printing that successively give life to his stagings.